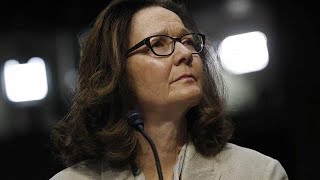 How did a person who should be in the criminal dock both in the US and in the International Criminal Court for running a torture prison get appointed the Director of the US Central Intelligence Agency? What is all the Washington talk about defending human rights when a torturer is put in charge of covert operations?

But now Washington has a real criminal, a real person who has committed without any doubt "crimes against humanity" confirmed by the US Senate as CIA director. That tells us a lot about the hypocrisy, double standards, and utter mendacity of the government in Washington.

As some Republicans voted against the torturer in chief, it was the Democrats that put a torturer at the head of the CIA.

Listen to their excuses:

North Dakota's Heidi Heitkamp said that Trump had picked the director best suited to the job. Heidi said she would make sure that Congress conducts oversight of Haspel's job, an ambivalent statement if the job is torture, which seems to be enshrined in US practices.

Indiana's Senator Joe Donnelly said that he believed Haspel "has learned from the past, and that the CIA under her leadership can help our country confront serious international threats and challenges."

What threats? What challenges? This is bla-bla talk. Think about it for a minute. Imagine a criminal before the judge saying "I have learned from my past crimes and am now fit to be an upstanding citizen who can help our country."

Florida's Bill Nelson covered his collapse as a moral person by meeting with Haspel personally and arriving at the conclusion that she was fit to serve.

According to Newsweek these four US Democratic senators face tough re-elections and voted to clear Haspel in order to appease the Trump deplorables. In other words, these four senators think that the deplorables, who voted for Trump because he said he was for peace in Syria and with Russia and was against the US being policeman of the world, want to have a torturer confirmed as CIA director. The Democrats voted for a torturer because they are afraid of Trump voters. If Trump voters want a torturer in office, the senators would be honor-bound to stand up to the Trump voters.

Senator Jeanne Shaheen (D, NH) said that she believes Haspel that she won't torture again. "Your honor," said the murderer in the dock, "I promise I won't murder again. Just give me this plumb appointment as chief of police."

Virginia's Mark Warner, vice chairman of the Senate Select Committee on Intelligence, put Haspel in the job with his assurance that she would stand up to Trump if he ordered her to torture. In other words, Warner associates Trump with torture, not Haspel who has actually tortured.

Please, let us not hear again about America liberating other nations and defending human rights, or having a moral conscience, or being a light unto the world.

Related Topic(s): Confirmed; Democrats; Deplorables; Gina Haspel; Senate; Torture, Add Tags
Add to My Group(s)
Go To Commenting
The views expressed herein are the sole responsibility of the author and do not necessarily reflect those of this website or its editors.