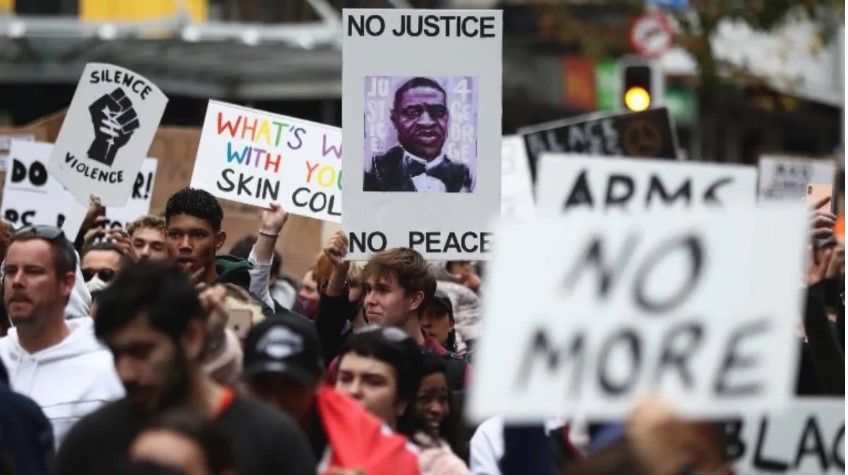 Liberals are trying to use reformism to deflect the energy of the George Floyd protests away from what should be the protests' ultimate goal: the decolonization of the continent that's been falsely named "America." They claim that the violence against colonized peoples which the settler-colonial system has ingrained into law enforcement will be solved by "defunding the police," whatever this is supposed to mean. They claim that the United States can move past racism, as if this settler-colonial regime and the capitalist system that it enforces aren't tied in with racism.

Therefore decolonization won't be a peaceful process, as liberals will no doubt claim it to be as it continues getting brought up. It will be an act of warfare against the illegitimate state of the settlers. Such was the case during the decolonization movements within Africa, whose inevitably violent natures were reflected on by Frantz Fanon in The Wretched of the Earth:

The starving peasant, outside the class system, is the first among the exploited to discover that only violence pays. For him there is no compromise, no possible coming to terms; colonization and decolonization are simply a question of relative strength. The exploited man sees that his liberation implies the use of all means, and that of force first and foremost. When in 1956, after the capitulation of Monsieur Guy Mollet to the settlers in Algeria, the Front de Libe'ration Nationale, in a famous leaflet, stated that colonialism only loosens its hold when the knife is at its throat, no Algerian really found these terms too violent. The leaflet only expressed what every Algerian felt at heart: colonialism is not a thinking machine, nor a body endowed with reasoning faculties. It is violence in its natural state, and it will only yield when confronted with greater violence.

The questions to ask, then, aren't "how to get America to defund its police?" or "how to vote out America's current leadership?" They're "how to overcome the violence of the settler state?" and "how will the continent be decolonized after the settler state is overthrown?"

As for how to overcome the state's violence, the recently created Seattle autonomous zone has taught us a lesson in how this can be done. The zone has been established by armed activists, introducing the element of force that's essential for countering the violence of the state. The reason why it will in all likelihood be retaken by the state is that its defenders lack the resources to permanently hold onto land. Future attempts at creating sustainable autonomous zones will be more likely to succeed if we utilize this moment to build up our movement's defense forces; getting the members of anti-racist organizations armed and trained is how to help with this task.

The answer to the question of how decolonization will happen runs through the goal of defeating individualism and social chauvinism, which largely pervade the current left. It's not enough for an organization to be anti-racist, it also has to put forth a political line that's capable of defeating the capitalist and colonial regime. Anarchist groups, which have gained a presence in the recent protest movement, don't address this need.

This is because anarchism, as opposed to communism, doesn't acknowledge all of the steps that will need to be taken in order to dismantle capitalism. As Lenin explained in The State and Revolution, after the capitalist state is overthrown the revolutionaries will need to create a state for themselves. Otherwise the means for building and defending a socialist society won't be available. The same realities apply to the task of replacing the settler-colonial state with a series of states which are controlled by the indigenous First Nations; government will be necessary to keep these liberated nations defended from reactionary and imperialist violence.

Related Topic(s): Colonialism; Imperialism; Liberation; Socialism, Add Tags
Add to My Group(s)
Go To Commenting
The views expressed herein are the sole responsibility of the author and do not necessarily reflect those of this website or its editors.