Sitting alongside French President Macron during the 100th anniversary to commemorate the end of World War I, Putin and Trump stole the show in Paris 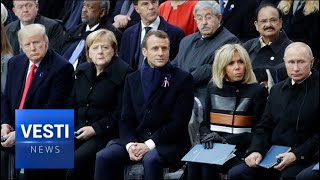 Macron Upstaged! Focus of World NOT on WWI Ceremony, But on Trump and Putin Meeting
(Image by YouTube, Channel: Vesti News)   Details   DMCA

The Elysee Palace protocol was implacable. Nobody in Paris would be allowed to steal the spotlight away from the host, President Emmanuel Macron, during the 100th anniversary of Armistice Day marking the end of World War I.

After all, Macron was investing all his political capital as he visited multiple World War I battlefields while warning against the rise of nationalism and a surge in right-wing populism across the West. He was careful to always place the emphasis on praising "patriotism."

A battle of ideas now rages across Europe, epitomized by the clash between the globalist Macron and populism icon Matteo Salvini, the Italian interior minister. Salvini abhors the Brussels system. Macron is stepping up his defense of a "sovereign Europe."

And much to the horror of the US establishment, Macron proposes a real "European army" capable of autonomous self-defense side by side with a "real security dialogue with Russia."

Yet all these "strategic autonomy" ideals collapse when you must share the stage, live, with the undisputed stars of the global show: President Donald Trump and President Vladimir Putin.

So the optics in Paris were not exactly of a Yalta 2.0 conference. There were no holds barred to keep Trump and Putin apart. Seating arrangements featured, from left to right, Trump, Chancellor Angela Merkel, Macron, his wife Brigitte and Putin. Neither Trump nor Putin, for different reasons, took part in a "walking in the rain" stunt evoking peace.

And yet they connected. Sir Peter Cosgrove, the governor general of Australia, confirmed that Trump and Putin, at a working lunch, had a "lively and friendly" conversation for at least half an hour.

No one better than Putin himself to reveal, even indirectly, what they really talked about. Three themes are absolutely key.

On the Macron-proposed, non-NATO European army: "Europe is ... a powerful economic union and it is only natural that they want to be independent and " sovereign in the field of defense and security."

On the consequences of such an army: It would be "a positive process" that would "strengthen the multipolar world." On top of it, Russia's position "is aligned with that of France."

On relations with the North Atlantic Treaty Organization and Washington: "It is not us who are going to withdraw from the INF Treaty. It is the Americans who plan to do that." Putin added that Moscow has not scheduled military drills near NATO borders as an attempt to appease an already tense situation. Yet Russia has "no issue with" NATO drills and expects at least a measure of dialogue in the near future.

Vast sectors of the US Deep State are in denial, but Putin may have been able to impress on Trump the necessity of serious dialogue due to an absolutely key vector: the Avangard.

The Avangard is a Russian hypersonic glide vehicle capable of flying over Mach 20 -- 24,700km/h, or 4 miles per second -- and one of the game-changing Russian weapons Putin announced at his ground-breaking March 1 speech.

The Avangard has been in the production assembly line since the summer of 2018, and is due to become operational in the southern Urals by the end of next year or early 2019.

Related Topic(s): Donald Trump In Paris; French President Macron; Vladimir Putin; Weapons; World War I, Add Tags
Add to My Group(s)
Go To Commenting
The views expressed herein are the sole responsibility of the author and do not necessarily reflect those of this website or its editors.