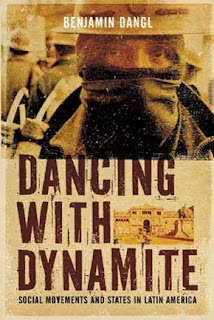 --An interview with Ben Dangl

Benjamin Dangl, author of the new book Dancing With Dynamite (AK Press), was video-interviewed by Angola 3 News this week while visiting the San Francisco Bay Area, on tour with his book, which has been positively reviewed by a range of publications and writers, including Democracy Now's Amy Goodman, who proclaimed that "Ben Dangl breaks the sound barrier, exploding many myths about Latin America that are all-too-often amplified by the corporate media in the United States."

Dangl has previously written The Price of Fire: Resource Wars and Social Movements in Bolivia (AK Press, 2007), and contributed to Taking Sides: Clashing Views on Latin American Issues (McGraw-Hill, 2006). He has written about politics and social issues in Latin America for The Guardian Unlimited, The Nation Magazine, The Progressive, Utne Reader, CounterPunch, Alternet, Common Dreams, Z Magazine, La Estrella de Panama and more. While currently teaching Latin American history and politics and globalization at Burlington College in Vermont, he also works as editor of the news websites: Upside Down World, focusing on politics and social movements in Latin America (founded by Dangl), and Toward Freedom, a progressive perspective on world events.

In Dancing With Dynamite's introduction, Dangl writes that "this book deals with the dances between today's nominally left-leaning South American governments and the dynamic movements that helped pave their way to power in Bolivia, Ecuador, Argentina, Uruguay, Venezuela, Brazil, and Paraguay. The discussion surrounding the question of changing the world through taking state power or remaining autonomous has been going on for centuries. The vitality of South America's new social movements, and the recent shift to the left in the halls of government power, make the region a timely subject of study within this ongoing debate. Though often overlooked in contemporary reporting and analysis on the region, this dance is a central force crafting many countries' collective destiny."

Dangl feels that US activists can learn much from studying this "dance," telling Angola 3 News that "because South American social movements have been so successful in the past decade, I think it is important to learn and understand what's been successful and to apply those strategies and tactics here, where we are facing very similar challenges." Because the political climate in the US today is different from Latin America in many ways, Dangl argues that "these strategies and tactics shouldn't just be taken and applied directly to our communities, but should instead be considered and made useful in our own context and realities."

In the interview, Dangl cites several different lessons for US activists, including the need to "create the kind of social relationships within our own social movements that reflect the kind of world that we are fighting for every day. That's been useful for neighborhood councils in El Alto, Bolivia where people work together every day, whether it's to build roads, soccer fields, or pressure a mayor for better access to electricity and water. These kinds of social relations within the family and neighborhoods help to create the capacity to mobilize road blockades and protests when that's needed."

There are also lessons here for US activists seeking to push President Obama and other politicians further to the left, as Dangl thinks the question of "how to fight against a relative ally in political office without empowering the right" has been "negotiated very successfully throughout South America."

Fortunately, US activists have already been learning from their neighbors to the south. In the book's introduction, Dangl cites several examples, including "the 2008 occupation of the Republic Windows and Doors factory in Chicago which drew from tactics in Argentina, the movements for access to water in Detroit and Atlanta, which reflected tactics and struggles in Bolivia, and the Take Back the Land movement in Florida, which organized homeless people to occupy a vacant lot and pairs homeless families with foreclosed homes, mirroring the tactics and philosophy of the landless movement in Brazil."

When asked for a closing thought at the end of our interview, Dangl emphasized the larger global struggle against oppression by arguing that Dancing With Dynamite's lessons extend well beyond the US and Latin America. "With what's happened in Egypt with the overthrow of Mubarak, and what is going on right now in Madison,Wisconsin with the fight for collective bargaining, I think these struggles are related in the sense that they're all about political power. With these recent examples, there is a shift in power from the government office to the streets, and recognizing that is important today in the fight for social change. In Madison, activists say they've been really inspired by activists in Egypt. Recognizing these common oppressors & common systems of exploitation, and working for solutions together across borders is really a solution for making the world a better place."

--Angola 3 News is a project of the International Coalition to Free the Angola 3. Our website is http://www.angola3news.com where we provide the latest news about the Angola 3. We are also creating our own media projects, which spotlight the issues central to the story of the Angola 3, like racism, repression, prisons, human rights, solitary confinement as torture, and more.

Over 40 years ago in Louisiana, 3 young black men were silenced for trying to expose continued segregation, systematic corruption, and horrific abuse in the biggest prison in the US, an 18,000-acre former slave plantation called Angola. In 1972 and (more...)
Related Topic(s): America; Books; Exploitation; Freedom; Government; International; Media; Politics; Power; Protest; (more...) Repression; Rights; State; Strategies; Torture; Video; Work; Work, Add Tags  (less...)
Add to My Group(s)
Go To Commenting
The views expressed herein are the sole responsibility of the author and do not necessarily reflect those of this website or its editors.