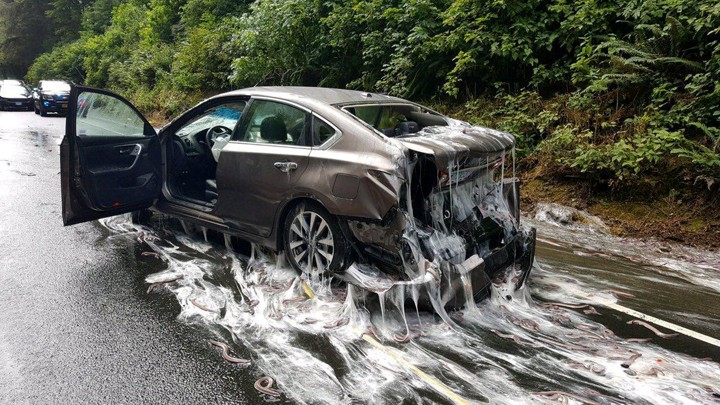 This car was disabled when it passed through a puddle of slime left by an overturned truck bearing hagfish to market.

The hagfish produces such copious amounts of slime that it can immobilize prey, or clog the gills of an attacking shark.

Hagfish are true fish, but of an ancient order similar to lampreys that separated from bony fishes 300 million years ago. They look like eels, but have even more flexible bodies beneath a loose bag of skin.

Hagfish eat by boring through the carcass of a dead fish, then absorbing nutrients through their skin. The mouth is just a drill head.

They're a delicacy in Korea.

Article in The Atlantic

Related Topic(s): Fish, Add Tags
Add to My Group(s)
Go To Commenting
The views expressed herein are the sole responsibility of the author and do not necessarily reflect those of this website or its editors.