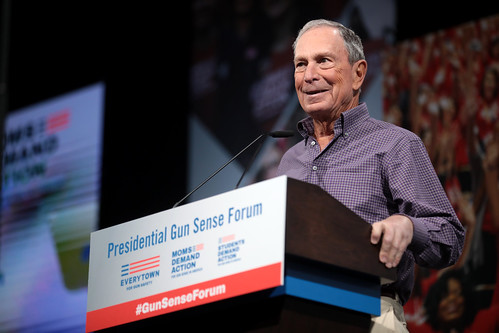 The DNC is doing as most Bernie Sanders supporters expected-- they are rigging the game to hurt Bernie and help their pick for candidate, who now, with Joe Biden falling fast, looks to be Mike Bloomberg.

The Democratic National Committee is drastically revising its criteria to participate in primary debates after New Hampshire, doubling the polling threshold and eliminating the individual donor requirement, which could pave the way for former New York City Mayor Mike Bloomberg to make the stage beginning in mid-February.

Clearly, this gives Bloomberg a massive advantage the existing rules did not give him. My guess is he pulled a Hillary and bought the DNC-- not literally-- but he probably gave an eight figure donation.

The problem with this duplicitous DNC move is that it also screws all the other candidates who were in the race-- particularly the ones who were kept out of one or more debates because they did not meet the criteria.

My guess is that the neoliberal, centrist DNC and Democratic leadership are litterally Sh*tting their pants with the looming victory of Bernie Sanders in Iowa and New Hampshire-- and not only victories, but victories that will prove that the pollsters have been doing something to undercut Bernie with lower positives than he really should be getting.

Consider that this is just one cut of a thousand cuts that the DNC and the Democratic leadership will be inflicting on Bernie.

What do you think?

Related Topic(s): Anti Bernie Sanders; Democrats DNC; Michael Bloomberg, Add Tags
Add to My Group(s)
Go To Commenting
The views expressed herein are the sole responsibility of the author and do not necessarily reflect those of this website or its editors.