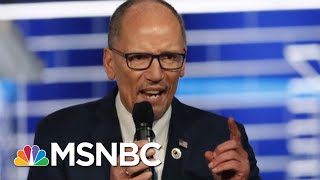 How much is the Democratic Party Inc. worth?

It is easier to understand the machinations of the DNC Inc, if we understand what they really are. The DNC Inc. operates just like a private corporation.

So, what is the valuation of the DNC Inc.?

We are soon going to find out. If you are like most people you believe your political party is a group of people who share common political goals and ideal. Everyone comes together with great enthusiasm elect the person to carry those shared hopes to election victory.

Nothing could be farther from reality. Today, political parties are similar to any media network or social media. Most party members believe they are the customer of the political party. The party will honestly calculate the cumulative opinion of the majority of the party members which is expressed through a series of caucuses and primaries. Again, nothing could be farther from reality. The DNC like many private corporation boards make decisions based on their interests and their profitability.

The political party members views, opinions, and votes are actually the product that gets sold to the real customer, the real client. Which is another corporation that buys a political party's ability to get favorable legislation passed or stop unfavorable laws and to manage, control the expectations of people. They DNC works very closely with the corporations in the banking, oil, pharmaceutical, healthcare, foreign governments such as Israel, Saudi Arabia, weapons manufacturers, gun manufacturers among others. Both parties aggressively compete for those lucrative markets.

Facebook give you free access. Then they sell your data and access to you. You are the product to their real customer, the advertiser. Similar to a political party.

Now the Democratic National Committee Inc. Inc is reeling from two terrible launches. Launches that their corporate board believed were sure fire/can't miss ideas. First, the impeachment of Donald Trump and second, the Joe Biden candidacy that was supposed to insure stability and continuity in the DNC business plan.

"Former Vice President Joe Biden assured rich donors at a ritzy New York fundraiser that "nothing would fundamentally change" if he is elected.

Biden told donors at an event at the Carlyle Hotel in Manhattan that he would not "demonize" the rich and promised that "no one's standard of living will change, nothing would fundamentally change," Salon

Now after their very poor performance and utter incompetence the DNC leadership is confronting a very real hostile takeover by a corporate raider named Bernie Sanders.

Related Topic(s): Democratic Cowards; Democratic Lies; Democratic Party; Democratic Sellout; Democratic Socialists, Add Tags
Add to My Group(s)
Go To Commenting
The views expressed herein are the sole responsibility of the author and do not necessarily reflect those of this website or its editors.

Why Some Americans hate Edward Snowden

DNC, Fearing an Unfriendly Sanders Takeover, Will Sell out to Bloomberg for Pennies

What can we do about Gun Violence in the USA?