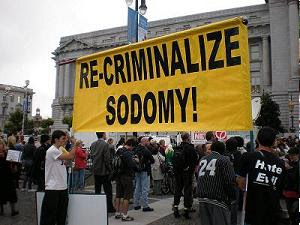 The Christian Right Has Ratcheted Up The Hate

The House voted to repeal Don't Ask Don't Tell on the day the 1000th US soldier was killed in Afghanistan, making the day bittersweet, in a sense, for the military: if ithe impending repeal had been sooner (or if it had not been enacted at all), would the addition of over 14,000 highly skilled servicemen have prevented that death?

According to some people, there will been MORE deaths caused by openly gay soldiers. The reasoning may be considered bizarre, but it clings to elements of the Christian Right like hate clings to violence.

There is no doubt that the months-long progress of the repeal has brought out the worst in people: situations like the pending legislation in Uganda demonstrated what the CR is capable of fomenting, and just days ago the Gay Blood Libel* was utilized to crush the repeal.

Hitler discovered that he could not get straight soldiers to be savage and brutal and vicious enough to carry out his orders, but that homosexual soldiers basically had no limits.

A PERSONAL NOTE
I am not a true gay rights activist, I ashamed to say. Today's LGBT community has enough problems without including my insubstantial my rants as part of its cause. I wish to God I were one. I just can't work hard enough: in perspective I haven't accomplished nearly as much as so many who work night and day to help us gain respect, acceptance and security.

So this article is not coming from an activist, but from a person who is just adding his voice to the chorus. When I first heard the term "gay agenda" I was dumbfounded. Even after years of being out, I had never heard the term before. I fancied myself as a well-read, urbane gay man, so I wondered how I had missed that one. Once, in about 1978, I saw a documentary titled "Gay Power, Gay Politics." Some today would have given it the term "mockumentary," but believe me, the producers thought too much of themselves for anything to be tongue-in-cheek. The title said one thing, but the content was just a make-shift polemic on men cruising in public areas. How they ever arrived at the title is anybody's guess. It also hinted at a "gay agenda," so I suppose the term may have stemmed from this specious piece. And because there were people who wanted to believe that gays were mindlessly promiscuous men with evil intentions, the "gay agenda" took hold and slowly, stealthfully, grew.

Rev. Dan Vojir is has been writing/blogging on religion and politics for the better part of ten years. A former radio talk show host (Strictly Books €" Talk America Radio Network) and book publisher, Dan has connected with some of the most (more...)
Related Topic(s): American Family Association; Bachmann-Michele; Bryan Fischer; Dont Ask Dont Tell; Family Research Council; Hate-Racism-Bigotry; Kill Gays Bill; LGBT; Nazism; People Keith Olberman; (more...) People Robertson Pat; RIght Wing Lies; Scott Lively; Watchmen On The Wall, Add Tags  (less...)
Add to My Group(s)
Go To Commenting
The views expressed herein are the sole responsibility of the author and do not necessarily reflect those of this website or its editors.