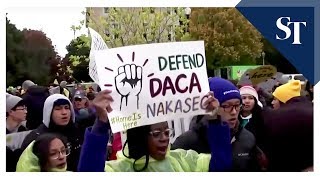 After the arguments before the Supreme Court in the Deferred Action for Childhood Arrivals (DACA) case, it is difficult to predict the outcome. Justices often play devil's advocate when questioning the lawyers, so reading the tea leaves about how a case will ultimately be decided can be a dicey proposition. But the justices' questions appeared to indicate that right-wing Justices Alito, Gorsuch and Kavanaugh favor affirming Donald Trump's termination of DACA, and liberal Justices Kagan, Ginsburg and Sotomayor want to uphold DACA. Justice Thomas, who almost never asks a question during arguments, invariably sides with the right-wingers. Chief Justice Roberts, who generally takes the conservative position, and Justice Breyer, who more often votes with the liberals, were harder to read. Roberts, who appeared to lean toward the government's position, will likely cast the deciding vote.

On November 12, the justices heard arguments in Department of Homeland Security v. Regents of the University of California, a case that is testing whether Trump's rescission of DACA was lawful.

DACA was created by Barack Obama in 2012 to encourage undocumented people who arrived in the U.S. as children to come out of the shadows and register for temporary protection from deportation. They are called "Dreamers," inspired by the Development, Relief, and Education for Alien Minors (DREAM) Act, which Congress has failed to pass. Nearly 800,000 Dreamers have work permits and other benefits. Many are lawyers, doctors, engineers and military officers. According to one study, over 90 percent of them are employed and 45 percent are enrolled in school.

To qualify for DACA, a person must be a current student, a high school graduate, have a GED or an honorable discharge from the military. Applicants cannot have prior convictions of serious crimes or be considered a national security threat. The program provides a renewable two-year period of deferred immigration action for people who came to the U.S. as children and continuously lived in the U.S. for at least five years before June 15, 2012.

In September 2017, then-Attorney General Jeff Sessions announced that the Trump administration would rescind DACA, saying, "Such an open-ended circumvention of immigration laws was an unconstitutional exercise of authority by the Executive Branch."

Several states, DACA recipients and organizations challenged the termination of DACA in the federal courts, successfully arguing it was unlawful. The repeal of DACA was put on hold pending the Supreme Court's decision.

The two issues facing the Supreme Court are: (1) whether the courts have jurisdiction to review the decision to end DACA; and (2) whether the rescission of DACA was legal.

Do Courts Have Authority to Review Legality of DACA Rescission?

The government is arguing that the decision of whether to enforce the immigration laws is solely within agency discretion of the Department of Homeland Security (DHS) and not subject to judicial review. Ginsburg pointed out the contradiction in that position: On the one hand, the government says the decision is not subject to judicial review because DHS has sole discretion to end DACA, but on the other hand, it claims that DHS had no discretion because it was illegally established.

Kagan cited another contradiction in the government's argument, in which it "suggest[s] that the original DACA is review-able, but the rescission of DACA is not." She called that "an asymmetry in what's review-able."

Gorsuch said, "I hear a lot of facts, sympathetic facts," and "they speak to all of us," but like Alito, he did not seem to think the case was review-able.

Breyer appeared to be on the fence. "I'm saying honestly I am struggling," he said. But Breyer also challenged the government's argument that it has prosecutorial discretion to decide whether to enforce the immigration laws. Breyer distinguished a prosecutor's decision whether to charge an individual from the policies of an agency.

Is Trump's Rescission of DACA Lawful?

If the Supreme Court finds it has authority to review the government's decision to rescind DACA, it must then decide whether the rescission was lawful.

Those challenging the DACA rescission argued that DHS did not sufficiently consider the Dreamers' reliance interests when it decided to terminate DACA. People outed themselves as undocumented to apply for DACA in reliance on its promise of protection from deportation. Theodore Olson, the lawyer for the individual challengers, said, "Those reliance interests were engendered by the decision of the government that caused people to come forward."

Breyer cited a Justice Scalia opinion saying that when an agency's "prior policy has engendered serious reliance interests, it must be taken into account." Breyer added, "That's this case, I think." He mentioned 66 health care organizations, three labor unions, 210 educational institutions, six military organizations, three home builders, five states, 108 municipalities and cities, 129 religious organizations and 145 businesses, most of which, Breyer said, listed reliance interests. In other words, these groups are relying on the Dreamers whose study and work they depend upon.

Related Topic(s): Daca; Dreamers; Immigration; Justice; Supreme Court Hypocrisy; Undocumented, Add Tags
Add to My Group(s)
Go To Commenting
The views expressed herein are the sole responsibility of the author and do not necessarily reflect those of this website or its editors.