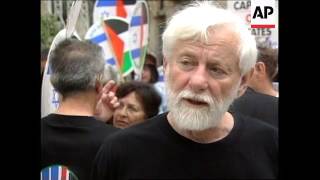 ANYONE PROPOSING the death penalty is either a complete fool, an incorrigible cynic or mentally disturbed -- or all of these.

There is no effective therapy for any of these defects. I wouldn't even try.

A fool would not understand the overwhelming evidence for the conclusion. For a cynic, advocacy of the death penalty is a proven votecatcher. A mentally disturbed person derives pleasure from the very thought of an execution. I am not addressing any of these, but ordinary citizens of Israel.

LET ME start by repeating the story of my own personal experience.

In 1936, the Arab population of Palestine launched a violent uprising. The Nazi persecution in Germany drove many Jews to Palestine (including my own family), and the local Arabs saw their country slipping away from under their feet. They started to react violently. They called it the Great Rebellion, the British talked of "disturbances" and we called it "the events."

Groups of young Arabs attacked Jewish and British vehicles on the roads. When caught, some of them were sent by the British courts to the gallows. When the Arab attacks did not stop, some right-wing Zionists started a campaign of "retaliation" and shot at Arab vehicles.

One of these was caught by the British. His name was Shlomo Ben-Yosef, a 25-year-old illegal immigrant from Poland, a member of the right-wing youth organization Betar. He threw a grenade at an Arab bus, which failed to explode, and fired some shots that hit nobody. But the British saw an opportunity to prove their impartiality.

Ben-Yosef was sentenced to death. The Jewish population was shocked. Even those who were totally opposed to "retaliation" pleaded for clemency, rabbis prayed. Slowly the day of the execution drew near. Many expected a reprieve at the last moment. It did not come.

The hanging of Ben-Yosef on June 29, 1938 sent a powerful shockwave through the Jewish public. It caused a profound change in my own life. I decided to fill his place. I joined the Irgun, the most extreme armed underground organization. I was just 15 years old.

I repeat this story because the lesson is so important. An oppressive regime, especially a foreign one, always thinks that executing "terrorists" will frighten others away from joining the rebels.

This idea stems from the arrogance of the rulers, who think of their subjects as inferior human beings. The real result is always the opposite: the executed rebel becomes a national hero, for every rebel executed, dozens of others join the fight. The execution breeds hatred, the hatred leads to more violence. If the family is also punished, the flames of hatred rise even higher.

Simple logic. But logic is beyond the reach of the rulers.

Just a thought: some 2,000 years ago, a simple carpenter was executed in Palestine by crucifixion. Look at the results.

IN EVERY army, there are a number of sadists posing as patriots.

Related Topic(s): Country First; Israel; Occupation; Palestinian; Shooters; Soldiers, Add Tags
Add to My Group(s)
Go To Commenting
The views expressed herein are the sole responsibility of the author and do not necessarily reflect those of this website or its editors.