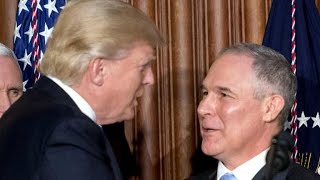 Scott Pruitt flies first class international with his entourage to Paris for a couple of days -- just to party -- and then on to Morocco for one day to promote the sale of liquefied natural gas produced by a crony -- a lobbyist for the LNG company that gives Pruitt a sweetheart deal on a fancy place to stay in Washington DC.

Pruitt is head of the EPA, not the Department of Energy or Commerce. He has no official business pushing LNG, yet the entire trip for him and his crew of sleazy associates was paid for by those of us who pony up every paycheck and every April -- you, the American taxpayer. Turns out Trump's buddy, billionaire Carl Icahn, was the majority stockholder in the LNG corporation. Crony corruption.

Pruitt was basically installed by Trump as head of the Environmental Protection Agency with a stated mission to undermine, subvert, and reverse the EPA core mission. To rich Republicans -- well, perhaps to most Republicans -- the environment is simply a dumping ground for toxics, hazardous waste, and other effluents of industry. Why? So that their corporations don't have to pay clean-up costs either in prevention or remediation. The rich ones profit. The poor ones vote to get back dirty jobs that have gone overseas where environmental laws and labor laws are nonexistent or toothless. Crony corruption coupled with a devil's bargain.

To make certain that no fraudulent stone was unturned, Pruitt signed off on massive pay raises for loyalists, lied and denied that he did so on Fox News, and remains untouched by the "You're fired" King. Crony corruption.

Ah, they all do it. And? Trump came in claiming he would "drain the swamp." Liar. The swamp is crawling with worse than anything since Mobutu Sese Seka. Crony corruption.

That Trump himself refuses to make public his tax returns, refuses to divest himself in any way from his corporate profit-taking related to his public office, and that so many of his appointees are wallowing in seamy travel, insider fraud, and shady foreign connections, makes this just part of the Washington wallpaper, right? You hear Trump the carny barker candidate and you elect him -- WTF do you expect?

Even the Trump White House has criticized Pruitt's ethics. Huh? We are on Full Oxymoron Alert when we hear the phrase Trump Ethical Standards, yet it happened. Still, at least so far, Pruitt's in his gig, swinging his wrecking ball at environmental and ethics rules literally left and right. Crony corruption.

Nixon was Mr. Clean by comparison. Dick Cheney and Donald Rumsfeld made $millions off their policies while they ruled and yet never quite exuded the moral and ethical swampy stench we now endure from Team Trump.

Crony corruption. Do we deserve better? Certainly our children and grandchildren do.

Tom H. Hastings is core faculty in the Portland State University graduate program in Conflict Resolution, a founding member of Whitefeather Peace House, Director of PeaceVoice, author of several books on nonviolence, on the governing council of (more...)

Related Topic(s): Corruption; Cronyism; Disaster Capitalism; Environment; Republican, Add Tags
Add to My Group(s)
Go To Commenting
The views expressed herein are the sole responsibility of the author and do not necessarily reflect those of this website or its editors.