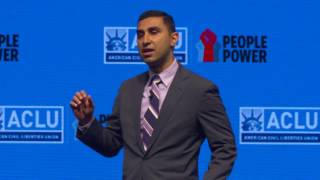 The bill in Congress that c ould make it a felony punishable by prison-time to advocate for boycott against Israel is causing a big splash in liberal and progressive waters. Numerous organizations have come out against the bill, including J Street, which warns against giving the Trump administration any power to "lock them up."

Though there is also considerable confusion about just what the law would allow the government to do. The ACLU says that "simply requesting information about such boycotts" could expose a person to penalties. But Jewish Voice for Peace warns its followers not to let the bill chill their advocacy, because it "does not make it illegal for individual consumers to boycott Israeli or settlement products."

Here are some of the responses. First, here is the full ACLU letter to Senators opposing the legislation.

We write today in opposition to S. 720, also known as the Israel Anti-Boycott Act. We understand that proponents of the bill are seeking additional co-sponsors. We urge you to refrain from co-sponsoring the legislation because it would punish individuals for no reason other than their political beliefs. We also urge you to oppose the bill, whether in committee or on the floor, unless it has undergone significant revision to resolve its constitutional infirmities.

The bill seeks to expand the Export Administration Act of 1979 and the Export-Import Bank Act of 1945 which, among other things, prohibit U.S. persons from complying with a foreign government's request to boycott a country friendly to the U.S. The bill would amend those laws to bar U.S. persons from supporting boycotts against Israel, including its settlements in the Palestinian Occupied Territories, conducted by international governmental organizations, such as the United Nations and the European Union. It would also broaden the law to include penalties for simply requesting information about such boycotts.

Violations would be subject to a minimum civil penalty of $250,000 and a maximum criminal penalty of $ 1 million and 20 years in prison. We take no position for or against the effort to boycott Israel or any foreign country, for that matter. However, we do assert that the government cannot, consistent with the First Amendment, punish U.S. persons based solely on their expressed political beliefs.

This bill would impose civil and criminal punishment on individuals solely because of their political beliefs about Israel and its policies. There are millions of businesses and individuals who do no business with Israel, or with companies doing business there, for a number of reasons. Some, like those who would face serious financial penalties and jail time under the bill, actively avoid purchasing goods or services from companies that do business in Israel and the Palestinian Occupied Territories because of a political viewpoint opposed to Israeli policy.

Others may refrain from Israeli-related business based on political beliefs, but choose not to publicly announce their reasoning. Still others do no business with companies in Israel for purely pragmatic reasons. Under the bill, however, only a person whose lack of business ties to Israel is politically motivated would be subject to fines and imprisonment -- even though there are many others who engage in the very same behavior. In short, the bill would punish businesses and individuals based solely on their point of view. Such a penalty is in direct violation of the First Amendment.

The ACLU has long supported laws prohibiting discrimination, but this bill cannot fairly be characterized as an anti-discrimination measure, as some would argue. For example, the Civil Rights Act of 1964 already prevents businesses from discriminating against customers based on race, color, religion, and national origin. This bill, on the other hand, aims to punish people who support international boycotts that are meant to protest Israeli government policies, while leaving those who agree with Israeli government policies free from the threat of sanctions for engaging in the exact same behavior. Whatever their merits, such boycotts rightly enjoy First Amendment protection.

By penalizing those who support international boycotts of Israel, S.720 seeks only to punish the exercise of constitutional rights. Accordingly, we urge you not to co-sponsor this bill and to oppose it when it comes before you either in Committee or on the floor. Please contact advisor on First Amendment issues Michael Macleod-Ball at 202.253.7589 if you have questions or comments about ACLU's opposition to this legislation.

Philip Weiss is a longtime writer and journalist in New York. He co-edits a website on Israel/Palestine, Mondoweiss.net, which he founded in order to foster the movement for greater fairness and justice for Palestinians in American foreign policy. He is currently working on a novel about the US in Australia during WW2.
Related Topic(s): ACLU; Boycott; Israel And Palestine; Israel Lobby; Israeli Pressure On US, Add Tags
Add to My Group(s)
Go To Commenting
The views expressed herein are the sole responsibility of the author and do not necessarily reflect those of this website or its editors.