"There is no compromise when it comes to corruption. You have to fight it." - A. K. Antony

The roots of corruption within the Los Angeles City Council were publicly exposed just after the primary election in March 2020 with the release of an indictment against Mitchell Englander. The charges against the former CD12 City Councilman were centered around a night of debauchery in Las Vegas paid for by a developer "seeking to increase his business opportunities in the City." Englander's Chief of Staff and eventual successor, John Lee, accompanied him on the trip and is widely thought to be the "City Staffer B" who obstructed justice when the two found out that their trip to Vegas was being investigated.

Later in the year, Englander's former colleague, Jose Huizar, was also arrested. The charges against him included an accusation that he accepted "$1.5 million in bribes from developers in exchange for his support of downtown building projects."

The charter-school industry has also been racked with corruption scandals within the past several years. In 2016, El Camino Real Charter High School's principal was caught charging personal expenses to his school-issued credit card. The founder and former Chief Executive Officer of Celerity charter schools pleaded guilty to engaging in a "scheme to misappropriate approximately $2.5 million of public education funds." An executive at the Community Preparatory Academy charter school embezzled $3.1 million. LAUSD Board Member Ref Rodriguez, who had been elected with financial support from the political arm of the California Charter School Association, was forced from office after pleading guilty to conspiracy in a felonious scheme to launder money "to further his 2015 campaign for a seat on the Los Angeles Unified School District Board of Education." 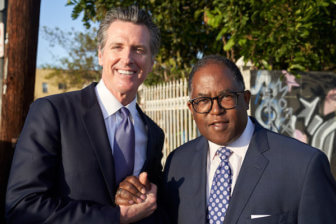 These two political worlds came together last week when another Los Angeles City Councilman and long-time supporter of charter schools was indicted by federal prosecutors. Mark Ridley-Thomas (MRT) is accused of taking "bribes from a USC dean in exchange for directing millions of dollars in public funding to the university when he was on the L.A. County Board of Supervisors."

The central figure in the scandal is "MRT Relative 1," who is not named but is said to have been "a member of the California State Assembly ("State
Assembly") from approximately 2013 to on or about December 31, 2017" and was "the subject of an internal sexual harassment investigation in the State Assembly." This would indicate that the unnamed "close relative" was his son, Sebastian Ridley-Thomas (SRT). Sebastian, who was elected to the State Assembly on December 3, 2013, resigned from office on December 31, 2017.

As "MRT Relative 1" was preparing to depart the Assembly, he made plans to "become the new director of Nonprofit A." In order to operate as a tax-exempt, 501(c)(3) entity, the organization operated under an umbrella organization that is referred to in the indictment as "Fiscal Sponsor A." The indictment states that Fiscal Sponsor A "did not provide funding to the entity." Therefore, in order "for MRT Relative 1 to receive compensation, obtain healthcare benefits, and hire staff, MRT Relative 1 would have needed to raise money for Nonprofit A's operating funds." These funds were provided by a Mark Ridley-Thomas campaign account. This set off alarms for the sponsor who "was concerned with, among other things, the nepotistic optics of a politician donating campaign funds to financially benefit his close relative." The $100,000 was refunded and "MRT Relative 1 did not become Nonprofit A's new director."

Using this same game plan, "MRT Relative 1" founded "Nonprofit B," which according to reporting at the time was Policy Research and Practice Initiative with a different fiscal sponsor. The Los Angeles Times reported in 2018 that Policy Research and Practice Initiative was a "think tank with nonprofit status through a relationship with the United Way of California." The United Way is an organization that has been closely tied with the Education "Reform" movement that strives to privatize public education.

Instead of donating the money directly through "Fiscal Sponsor 2," the Mark Ridley-Thomas campaign account is alleged to have laundered the money through the University of Southern California. This transaction was part of a series of deals where SRT is alleged to have financially benefited in exchange for the awarding of Los Angeles County contracts.

The events outlined in the indictment may be the tip of the iceberg in how MRT used nonprofit organizations to help his son. For example, SRT is listed in a 2017 annual report as an advisor to Peace Over Violence which includes a section on how the group works to end sexual harassment. This is the same year that the younger Ridley-Thomas was forced from his elected seat due to #MeToo allegations. Supervisor Mark Ridley-Thomas is listed as a Major Donor. The report does not say if the money for this donation came from his campaign accounts.

Alex M. Johnson is another member of the MRT orbit who had a soft landing provided by a nonprofit. After losing to George McKenna for a seat on the LAUSD School Board, Johnson was appointed by MRT to the Los Angeles County Board of Education. After leaving this role he became a full-time Interim Vice President of Programs for The California Wellness Foundation. During his LAUSD campaign, Johnson received a $25,000 donation from Sony that was funneled through the African American Voter Registration and Education Project, a PAC where SRT currently serves as a Chief Strategist. Sony pledged these funds prior to the election but made the payment afterward enabling "the PAC to spend more than it otherwise would have on behalf of Johnson, without voters knowing about the corporate support when they went to the polls."

The Quid Pro Quo aspects of the indictment are also strikingly similar to the events surrounding the hiring of SRT by the LAUSD as a consultant to help the charter-industry majority on the school board lobby against the teachers' union as they prepared to strike. This contract was signed despite the fact that SRT was prohibited by law from lobbying his former colleagues. Perhaps coincidentally, the senior Ridley-Thomas provided a "$10 million pledge of county mental-health money for school nurses" days later that helped to end the strike.

As another one of their politicians faces his day in court, it is time for the charter-school industry to evaluate why this keeps on happening to those who give support to these publicly funded private schools. From dirty campaigns to politicians that flagrantly violate ethics rules, winning at any cost seems to be the mantra of Charter Nation. And then there are the crooked businessmen who seem drawn to the model of getting government money without any real oversight of the charter schools they operate. What example does this set for the impressionable children that they seek to educate?