But a counter-attack centered on one or more statewide initiatives or constitutional amendments has become highly likely.

While thousands of protestors chanted, spoke and sang inside and outside the statehouse for the past two weeks (SB 5 Rally), the Ohio Senate voted 17-16 on Senate Bill 5, a bill that will slash collective bargaining for state workers by banning strikes and giving local officials the right to settle disputes. The bill, among other things, also eliminates all paid sick days from teachers.

The vote came amid shouts of "shame on you" and widespread booing from the diverse crowd of teachers, police, firefighters, construction workers, state employees and more. 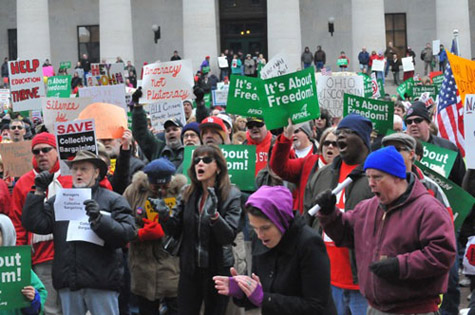 The bill decimates a legal framework in place since 1983.  The vote was surprisingly close as six Republicans joined ten Democrats in opposition.  The seventeen yes voters were all Republicans.

In order to vote the bill out of committee, Republican Senate President Tom Niehaus had to remove two key Republican senators who opposed the bill from crucial committees. Both Senators Scott Oelslager of Canton and Bill Seitz of Cincinnati were yanked from their posts. The removal of Seitz broke a committee stalemate and allowed the bill to come to the floor with a 7-5 vote.

Ultra-conservative Senator Timothy Grendell of rural Chesterland, Ohio demounced the bill as "unconstitutional" pointing out that it prohibits union members from talking with elected public officials during negotiations and labels such activity as an unfair labor practice. Seitz echoed this theme: "It's an unfair labor practice if they exercise their First Amendment right to call up their Councilman." 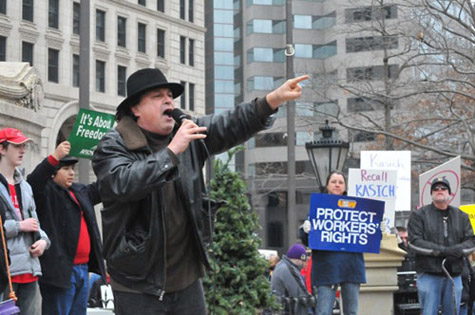 The bill now goes to the Ohio House, where it is fast-tracked and anticipated to pass by mid-March. In the House, the passage is being orchestrated by House Speaker Bill Batchelder. The Free Press has reported in the past of Batchelder's ties to the secretive Council for National Policy.

The Democrats do not hold enough seats in either house to deny the GOP a quorum, as is being done in Wisconsin and Indiana.

Ohio's multi-millonaire Governor John Kasich, who got rich selling junk assets as a managing partner for Lehman Brothers to public pensions in Ohio, will sign the bill as soon as he gets it.   Kasich was selected last November with a large last-minute contribution from Rupert Murdoch. Kasich is also a former Fox news commentator, who emerged in Ohio politics as one of Richard Nixon's freshly-scrubbed youth and was initially supported by followers of Reverend Moon.

Kasich has blamed budget problems on state workers.  But a rich person's repeal of Ohio's estate tax has cost the state a long-standing multi-million-dollar revenue stream.  Like Governor Scott Walker of Wisconsin, Kasich also has rejected a big federal grant ($400 million) to upgrade the state's passenger rail system, which would have created at least a thousand direct jobs and thousands more indirectly, along with a jump in state tax revenue.

Kasich meanwhile has given his chief of staff a substantial pay hike over that his predecessor.  He has hired at least four commissioners to sit on a "job creation" panel with annual salaries of roughly $150,000 each.   The commission has been structured to operate without formal accountability to the legislature or taxpayers of the state. Kasich has already succeeded in privatizing the state's department of development.