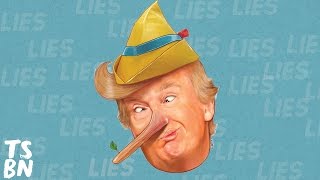 Press advocates scored an important legal victory this week when a U.S. District Court judge ordered the White House to reinstate media credentials to reporter Brian Karem, whose access had been stripped away by Donald Trump's team after a dust-up during a Rose Garden ceremony in July. There, former Trump aide Sebastian Gorka called Karem a "punk." Announcing that the White House hadn't provided Karem with due process when it stripped him of his credentials, the ruling marked the second time the White House has tried and failed to give a reporter the boot. (CNN's Jim Acosta was the previous target.)

That's the good news. The bad news? Karem is returning to what has largely become a useless White House beat. Permanently stuck in reactive mode as they respond to Trump's catalog of bizarre and untrue pronouncements, journalists have largely become spectators at 1600 Pennsylvania Avenue.

What's left for the White House press corps to do often resembles a journalistic joke. The daily press briefings have been effectively cancelled, which means White House reporters have extremely limited access to officials who are willing to answer even the simplest questions about the administration's policies and agenda. Meanwhile, the so-called White House sprays, where reporters are marched into a room and encouraged to shout questions at Trump (who then lies about everything), are relatively pointless. And that goes for the ritual of yelling questions at Trump while he stands near the whirling blades of a Marine One helicopter on the White House grounds as well.

In both cases, Trump simply uses reporters as props so they'll record his avalanche of lies and then air those lies on a televised loop all day. The so-called Chopper Talk sessions in particular allow Trump to simply bluster and ramble through questions that clearly stump him. And because the sessions are strangely covered as breaking news, Trump's lies are instantly amplified by the press, often without reporters providing proper context for them. The Marine One shout-fests "are terrible for reporters," one White House reporter recently conceded to Politico. "It is impossible to hear, have a substantive dialogue, ask a follow-up question or do any serious pressing of the president. It is a f*cking circus."

Related Topic(s): Reporters; Trump Attacks Democrats; Trump Attacks Media; Trump Fake News; Trump Liar, Add Tags
Add to My Group(s)
Go To Commenting
The views expressed herein are the sole responsibility of the author and do not necessarily reflect those of this website or its editors.