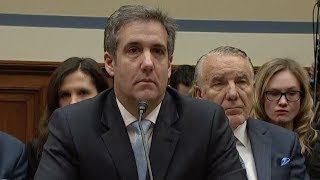 "The last time I appeared before Congress, I came to protect Mr. Trump. Today, I'm here to tell the truth about Mr. Trump," Cohen testified. "I am not protecting Mr. Trump anymore."

Cohen called Trump "a racist," "a conman" and "a cheat," who enlisted others to do his dirty work. "Trump did not directly tell me to lie to Congress. That's not how he operates." He "would look me in the eye and tell me there's no business in Russia and then go out and lie to the American people."

"In his way, he was telling me to lie," Cohen testified. He added that Trump would say, "Michael, it never happened" or "It's a lie." Moreover, he said, "Lying for Mr. Trump was normalized and no one around him questioned it. In fairness, no one questions it now."

Trump "knew of and directed the Trump Moscow negotiations throughout the campaign and lied about it," according to Cohen. "And so, I lied about it, too because Mr. Trump had made clear to me ... that he wanted me to lie."

Cohen said Trump knew ahead of time that the hacked Democratic National Committee emails would be released. When Cohen was in Trump's office, Roger Stone called. Trump put him on speakerphone. Stone said Julian Assange had told him that within a couple of days there would be a massive email dump that would hurt Hillary Clinton's campaign.

"Trump is a cheat," Cohen testified. He described Trump inflating and deflating his assets as it suited his financial interests. Trump would direct Cohen to call small business owners to whom Trump owed money and tell them they would receive no payment or a reduced payment.

Cohen painted a picture of Trump strong-arming people like a mob boss. Trump didn't directly threaten those he sought to intimidate, Cohen testified. "He would use others."

Cohen worked for Trump for 10 years. "Quite a few times," on some 500 occasions, Trump ordered Cohen to threaten people. That's mobster-like behavior.

Cohen Provided Evidence That Trump Was a Co-Conspirator

"Mr. Trump is a conman," Cohen said. "He asked me to pay off an adult film star with whom he had an affair, and to lie to his wife about it, which I did." Trump told Cohen to say that Trump "was not knowledgeable of these reimbursements and he wasn't knowledgeable of" what Cohen was doing.

"The President of the United States thus wrote a check for the payment of hush money as part of a criminal scheme to violate campaign finance laws," Cohen testified. He told Rep. Ro Khanna (D-California) that Trump "directed transactions in conspiracy" with Trump, Don Jr. and Allen Weisselberg "as part of a criminal conspiracy of financial fraud." Weisselberg is the CFO of The Trump Organization.

Cohen also characterized Trump as a co-conspirator to violate federal election law. According to Cohen, Trump had advance knowledge of the June 9, 2016, Trump Tower meeting between Donald Trump Jr., Paul Manafort, Jared Kushner and a Russian lawyer with ties to the Kremlin. Don Jr. arranged the meeting with the expectation of receiving dirt the Russian government had about Hillary Clinton. Cohen said he was in the room when Don Jr. whispered to his father, "The meeting is all set." Trump said, "OK good ... let me know."

All co-conspirators are legally responsible for the acts of the other co-conspirators, even if they didn't directly participate in those acts or are unaware of the details of the conspiracy. Trump need not have attended the June 9 meeting to be liable as a co-conspirator.

Related Topic(s): Michael Cohen; Trump Anger; Trump Con; Trump Crime; Trump Untrustworthy, Add Tags
Add to My Group(s)
Go To Commenting
The views expressed herein are the sole responsibility of the author and do not necessarily reflect those of this website or its editors.