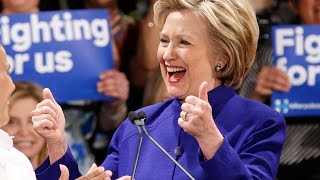 Following her strong 55% to 43% defeat of Bernie Sanders in the California Democratic primary Tuesday, Hillary Clinton is now within 199 delegate votes to become the first woman ever nominated as a candidate for president for a major U.S. political party.

The total number of delegates required for the the nomination is 2,383, a majority of the 4,765 delegates who will attend the convention.

Since the 1980s, the Democratic conventions have had two classes of delegates, pledged and unpledged. As the names indicate, a pledged delegate is a man or woman who ran, and won, on behalf of a candidate in a state primary or state caucus.

Under the party's "faithful delegate" rule, pledged delegates are required to vote for their candidate on the first ballot at the Democratic Convention which will be held in Philadelphia, Pennsylvania, July 25-28.

The unpledged delegates are party officials and leaders whose votes at the convention may go to any nominated candidate, which this year will include Hillary Clinton and Bernie Sanders.

Contrary to shallow and lazy media reporting, these unpledged ("super delegates" to use a media-derived name) are announced openly in their various states. There is nothing secret about their selection. They are chosen from inside a state and include state officials and party leaders.

The only remaining secret is how they will actually vote on the first ballot.

Under Democratic party rules, unpledged delegates are also chosen to insure that each state delegation conforms to the party rules that mandate an equal number of men and women, and minority representations that conform to a percentage of those minority voters in the state.

Clinton is now so close to her required number of delegate votes that, going into the DC primary she will need the support of only 199 unpledged delegates to give her the nomination.

Most of these super delegates announced their support for Clinton early in the primary/caucus season, long before Sanders became a serious candidate. They are free to change their minds, but given Clinton's strong delegate lead, they are unlikely to do so.

The Associated Press interviewed a number of these super delegates and found them holding to their initial support for Clinton. The AP reported that the super delegate count is currently 571 for Clinton and 47 for Sanders.

Sanders' final, and almost futile hope, is to keep Clinton from adding at least, her necessary 199 unpledged delegates to her current delegate total. For Sanders to "flip" promissory unpledged votes relies entirely on his argument that he would be the better candidate against the Republican nominee, Donald Trump.

Donald Trump now has sufficient Republican delegates to become his party's nominee at the Republican convention in Cleveland, Ohio, July 18-21.

Related Topic(s): Delegates; Democratic; Nomination; Politics; Super Delegates, Add Tags
Add to My Group(s)
Go To Commenting
The views expressed herein are the sole responsibility of the author and do not necessarily reflect those of this website or its editors.