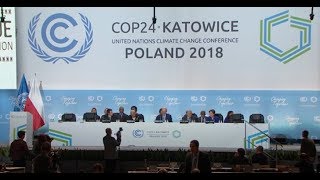 "Some people say that I should study to become a climate scientist so that I can 'solve' the climate crisis. But the climate crisis has already been solved. We already have all the facts and solutions. And why should I be studying for a future that soon may be no more, when no one is doing anything to save that future? And what is the point of learning facts when the most important facts clearly mean nothing to our society?

Today we use 100 million barrels of oil every single day. There are no politics to change that. There are no rules to keep that oil in the ground. So we can no longer save the world by playing by the rules, because the rules have to be changed. So we have not come here to beg the world leaders to care for our future. They have ignored us in the past, and they will ignore us again. We have come here to let them know that change is coming, whether they like it or not. The people will rise to the challenge. And since our leaders are behaving like children, we will have to take the responsibility they should have taken long ago.

Happy talk news coverage of COP24 accomplishments tends to prattle on about how 196 nations have agreed on a "rule book" that will help implement the 2015 Paris Agreement to begin cutting back on greenhouse gasses worldwide in an effort to limit the damage of the climate crisis already well underway. This is not bad news. It's not really news at all. The highly technical "rule book" may add clarity to what 195 nations are doing or not doing to mitigate global warming, but it is no more enforceable than the Paris Agreement. The response to the global climate crisis continues to be voluntary, with the world's most useful volunteers refusing to step up. Global greenhouse gas emissions increased in 2017 and are increasing again in 2018. None of this is new, nor is it necessarily an unalterable omen of planetary doom. But to head off the worst of this creeping catastrophe, major nations will need to change their behavior enough to have global impact. That is still a long, long way from happening. The US is in the retrograde vanguard, along with China, Russia, Saudi Arabia, Kuwait, and other oil-producing states.

The history of the world's limp response to climate change is an old, consistent story, since long before it reached crisis proportions. Human impact on climate was recognized as early as 1847, in a speech by Whig congressman George Perkins Marsh in a talk before the Agricultural Society of Rutland County, Vermont. His observations were largely cautionary, the kind of environmental concern that was ignored by the industrial revolution for a century, until there were too many toxic waste streams and Superfund sites to ignore, so the costs were passed on to the victims as much as guilty corporations and their quisling political flunkies could manage.

It's the same game with the climate crisis; those responsible avoid accountability at whatever cost to anyone but themselves. At COP24, 191 nations were eager to adopt the latest UN climate report that gives the world roughly 12 years to head off the worst effects of the climate crisis. This simple acknowledgement of the best current science available was blocked by the coercion of the US, Russia, Saudi Arabia, and Kuwait. The power politics of denial, led by the US, not only slows any rational response to continued warming, these politics encourage unchecked pursuit of the profitable but globally destructive practices that created the crisis in the first place.

As an example, take the 100 million barrels of oil the world uses every day, referred to by Greta Thornberg (above). Leaving those 100 million barrels in the ground, day after day after day, year after year, would accrue to the health and welfare of billions of people over decades if not centuries. By contrast, a few people, maybe a few thousand people in the oil and gas industry will die before they forego the profit from using every last drop no matter what carnage they cause. In a very real sense, the traditional energy industry is a calculating mafia for whom killing people isn't mass murder, it's just a cost of doing business, and the beauty part is that it's a cost they don't even have to pay.

The UN's Intergovernmental Panel on Climate Change isn't the only credible scientific body warning of the deepening climate crisis. The US government's official 1,596-page National Climate Assessment released in November also sounds alarms that increased warming will cost the US billions of dollars and millions of lives. The White House has rejected it and the president said, "I don't believe it." All the same, the evidence is clear, the science is sound, the crisis is real. UN Secretary General António Guterres spoke urgently and lucidly to the COP24 gathering in Katowice, Poland, delivering in his own words essentially the same message as 15-year-old Greta Thornberg -- that addressing and ameliorating climate change is not only necessary but entirely possible:

"We have the ways. What we need is the political will to move forward... Failing here in Katowice would send a disastrous message to those who stand ready to shift to a green economy.

"To waste this opportunity would compromise our last best chance to stop runaway climate change. It would not only be immoral, it would be suicidal."

COP24 was neither a failure nor a success. Insofar as the "rule book" was adopted, that's positive, but perhaps a Pyrrhic victory. There's little reason to think that enough of the nations that pose the major threats to the planet are even close to changing their practices sufficiently to make any real difference. There is no reason to expect any reduction in global emissions, which is necessary to mitigate the climate crisis. In the near term, global emissions are going to continue to increase and the only possible good news will be slowing the rate of increase. That is unlikely. The US is hell-bent on burning more oil, coal, and gas as well as loosening restrictions on emissions. Canada has long-term plans to decarbonize its economy, but for now it is rushing to capitalize on its tar sands oil.

According to the Union of Concerned Scientists, China has become the largest national greenhouse gas producer (once #1, the US is now #2) and that's unlikely to change. Australia is committed to more coal. Brazil is committed to agribusiness at the expense of the Amazon rainforest. Germany is still hooked on coal. And Poland, which hosted COP24, plans to continue to rely on coal. The #3 polluting nation, India, is committed to using coal to bring electricity to hundreds of millions of its people. The #4 polluting nation, Russia, relies heavily on coal and oil. And so it is across the industrialized world where no one wants to get too far from the herd as it ambles toward the cliff.

Precise measurements of particular greenhouse gasses from particular sources are hard to come by and mostly don't exist because the world is a tricky place to measure with precision. But the scale of the problem doesn't seem to be a mystery. More than half the climate-warming emissions come from China, the US, and the European Union (add India, Russia, and Japan and that's close to 70% of the total). In other words, there's little the rest of the world can do to make much difference. And right now there's no major national leadership anywhere committed to reducing greenhouse gas emissions enough to avert catastrophic warming. The US is deliberately heading for destruction, burning all the fossil fuels it can find. Other nations have a more mixed approach (China burns more coal and has more solar panels than anyone else by wide margins), but collectively it's nowhere near enough to keep the climate crisis from deepening.

Globally, some 70% of greenhouse gasses are created by the energy sector of the economy -- primarily electricity generation, transportation, heating/cooling, and industrial processes. Of those, electricity and transportation are the worst offenders. That's why solar panels and windmills matter so much (even when discounted for the industrial production emissions). The scale of the problem is huge and hard to grasp. But the laws of physics as applied to greenhouse gasses have brought us to a reality where the control and reduction of a planetary threat is understood and could be implemented, albeit with great difficulty and cultural stress. The main barrier to preserving a livable planet is the intellectual pollution of right-wing and corporatist ideologues who claim reality is a hoax. That's how the official US delegation ends up going to the climate change conference to promote using more coal. Self-preservation is the enemy of the profitable.

In a culture of equal treatment for disinformation, it's little wonder an organization like 350.org has trouble getting heard beyond its committed minority. Founded in 2008, 350.0rg refers to the presumed reasonable concentration of CO2 (carbon dioxide) in the atmosphere of 350 parts per million (ppm). In 2008, that reasonable level had long since been passed. In the 1880s, early in the industrial revolution, the CO2 level in the atmosphere was around 280 ppm. By 2008 the concentration was 386 ppm. Today CO2 concentration in the atmosphere is over 400 ppm and climbing. In its simplest terms, this is a clear crime against humanity (as well as a suicidal gesture). Perhaps it's time to start thinking of the climate crisis as a crime and the world as a crime scene. Then we'd need to figure out a way to round up the perpetrators. We know who they are.

As they were fond of saying back in the day: things are going to get a lot worse before they start getting worse.

Vermonter living in Woodstock: elected to five terms (served 20 years) as side judge (sitting in Superior, Family, and Small Claims Courts); public radio producer, "The Panther Program" -- nationally distributed, three albums (at CD Baby), some (more...)
Related Topic(s): 350org; Climate Change Deniers; Climate Crisis; Government Insanity; Health; Oil; Pollution; Scientists, Add Tags
Add to My Group(s)
Go To Commenting
The views expressed herein are the sole responsibility of the author and do not necessarily reflect those of this website or its editors.