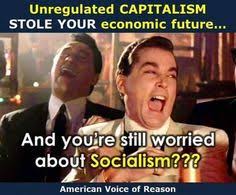 Last weekend, comedian, Bill Maher, and film-maker, Michael Moore, got into a shouting match on Maher's show "Real Time." Their point of contention was capitalism vs. socialism. Moore argued for socialism; Maher was against it. Their boisterousness reminded me of dinner-table arguments which (I'm ashamed to admit) I've been part of myself.

I bring all this up because the debate is intimately related to this morning's liturgy of the word. Though the readings obviously pre-date the emergence of the modern system, they all criticize what has historically become "the spirit of capitalism."

In any case, the Maher-Moore debate is worth considering not only because it manifests the relevance of the Jesus tradition to arguments like theirs. The argument also demonstrates the counter-productivity of the squabble itself. It's counter-productive because its terms fall into a trap congenial to the enemies of the biblical tradition. The trap frames alternatives to our present economic system in terms of "socialism" instead of in terms of social justice, mixed economy, and "preferential option for the poor."

That's a simple distinction I never tire of making, because (as I point out in my book, The Magic Glasses of Critical Thinking: seeing through alternative fact and fake news) it's absolutely key to the discussions of capitalism and socialism that will inevitably characterize the election season we've just entered especially following the eventual selection of any Democratic candidate. No matter who the candidate turns out to be, s/he will be predictably vilified for advocating socialism pure and simple an economic system that simply does not exist.

Maher and Moore both missed that point. The rest of us shouldn't. In fact, I recommend avoidance of capitalism-socialism framing altogether. I'll explain what I mean, and then elucidate the connections with today's readings.

To begin with, Moore's mistake was to represent as "socialism" his advocacy of Medicare for all (Maher was against it), free college tuition, college loan-forgiveness, and the Green New Deal. In reality, those programs notwithstanding, each of them represents elements of mixed economies the only form of economic organization that exists in our present context. And a mixed economy always has three elements (1) Some private and some public ownership of the means of production, (2) Some controlled markets and some that are free of control, and (3) earnings limited (usually by progressive income taxes).

Every economy in the world has those elements. There are no exceptions.

Mixed economies contrast with the three elements of capitalism as well as with those of socialism. Capitalism's three points are (1) Private ownership of the means of production, (2) Free and open markets, and (3) Unlimited earnings. None of the world's economies embodies those elements untempered by planning.

Meanwhile, socialism's three points are (1) Public ownership of the means of production, (2) Controlled markets, and (3) Limited earnings. Like untempered capitalism, such economic arrangement exists nowhere (including in "communist" China or Cuba).

For his part, Maher's defense of capitalism was also a defense of mixed economy. He agreed with many of Moore's points. So, Maher's "capitalism" was no less mixed than Moore's. The difference was that Maher wanted more market and less planning in economic policy.

This is not to say that all mixed economies are equal. (And this point is essential to keep in mind). The crucial question with them is "Mixed in favor of whom?" Those who mistakenly identify themselves as "capitalists" tend to advocate economies mixed in favor of the rich. They do so on the belief that wealth trickles down; a rising tide lifts all boats, etc.

Those who (equally mistakenly) identify as "socialists" want economies mixed more in favor of the working and unemployed classes. They recognize that unregulated markets respond primarily to those with the most money. Economies therefore have to be controlled to include those with limited (or no) resources.

With all of this in mind, Moore and Maher might have resolved their argument by recognizing that the choice before them is not between capitalism or socialism, but between an economy mixed in favor of the rich or one mixed in favor of the poor. And the formula for doing so might be: As much market as possible, with as much regulation as necessary (to assure a decent standard of living for everyone on the planet).

Now, a formula like that not only avoids "the socialist trap;" it is also highly compatible with the biblical social justice tradition that's expressed so clearly in this morning's liturgy of the word. As I've translated them below, today's selections point out the injustices inherent not only in the economies of the ancient world, but in today's neoliberal order. Both, the readings imply, were and are rigged in favor of the rich and against the poor. Check the readings for yourself here.

This is the way I interpret them:

Related Topic(s): Capitalism; Debate; Economy; Faith; God; Jesus; Judeo-christian; Justice; Religion; Socialism; (more...) Sunday, Add Tags  (less...)
Add to My Group(s)
Go To Commenting
The views expressed herein are the sole responsibility of the author and do not necessarily reflect those of this website or its editors.