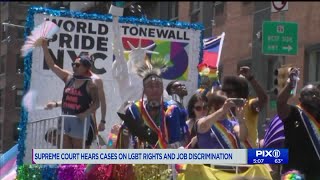 This term, the Supreme Court will decide whether people can be fired for being transgender or LGBQ, if people brought to the U.S. as children can be deported, whether states can impose restrictions on abortion that disproportionately harm poor women, how firm the separation between church and state is, the scope of the Second Amendment and whether criminal defendants can be convicted by less-than-unanimous juries.

Millions of people will be impacted by the results of these cases. "The court's decisions will affect 800,000 'dreamers,' in the DACA case...millions of LGBTQ workers in deciding whether federal discrimination laws protect on the basis of gender identity and sexual orientation, and 'half the country' in the abortion case," The Washington Post's Robert Barnes wrote, summarizing an interview with ACLU legal director David Cole.

These are some of the cases the Court will decide by the end of June 2020:

Barack Obama instituted Deferred Action for Childhood Arrivals (DACA) in 2012 to protect from deportation people who arrived in the United States as children. They are known as "Dreamers," a reference to the Development, Relief, and Education for Alien Minors (DREAM) Act, which Congress has failed to pass for nearly two decades. Donald Trump rescinded DACA in 2017, in furtherance of his anti-immigrant, anti-Obama agenda. The Trump administration claims that Obama's establishment of DACA was an "unconstitutional exercise of authority."

In Department of Homeland Security v. University of California, the plaintiffs the University of California and a number of states and DACA recipients argue that Trump's rescission of DACA was illegal. Trump argues that his decision to rescind DACA is not review-able by the courts. The Ninth U.S. Circuit Court of Appeals disagreed with Trump, saying his rescission of DACA was based "solely on a misconceived view of the law." The appellate court found meritorious plaintiffs' claims that the rescission was arbitrary and capricious and violated equal protection, due process and the Administrative Procedures Act.

The high court has recently come to different conclusions in two immigration-related cases. In a 5-4 decision, the Court affirmed Trump's Muslim Ban, holding that the president has broad authority over national security. But Chief Justice John Roberts joined the four liberal justices on the Court to prevent Trump from adding a citizenship question to the census, calling the administration's stated reasons "contrived."

Oral arguments in the case are set for November 12.

On October 8, the Court heard oral arguments in three cases that test whether Title VII of the 1964 Civil Rights Act, which forbids discrimination "because of ... sex," protects transgender and LGBQ employees from being fired. Bostock v. Clayton County and Altitude Express v. Zarda were brought by men fired for being gay. Harris Funeral Homes v. EEOC was filed by a woman fired for being transgender.

These are the first cases involving LGBTQ rights to reach the Court since Justice Anthony Kennedy retired. Kennedy wrote the opinions in four cases protecting gay rights and provided the fifth vote to uphold the right to same-sex marriage.

Three U.S. appeals courts and 22 states prohibit the firing of gay and transgender employees. It seems like a no-brainer. "Firing someone because they identify with a sex different from their assigned sex at birth is obviously firing them because of their sex," ACLU lawyer Gabriel Arkles wrote for Truthout. "And firing someone because they are attracted to people of the same sex is also obviously because of sex."

Ironically, Justice Neil Gorsuch may cast the deciding vote. During argument, he conceded that the text of Title VII was "close." But Gorsuch wondered whether the justices should consider the "massive social upheaval" if the Court ruled for the plaintiffs.

Gorsuch will hopefully channel his mentor, Justice Antonin Scalia, who authored the 1998 opinion for a unanimous court which held that Title VII covers harassment between members of the same sex. Scalia wrote that although Congress may not have anticipated such harassment when it wrote the law in 1964, "statutory prohibitions often go beyond the principal evil to cover reasonably comparable evils, and it is ultimately the provisions of our laws rather than the principal concerns of our legislators by which we are governed."

The Court will decide a case challenging a Louisiana law which, if upheld, would permit only one doctor in one clinic in the state to perform abortions. This law requires that in order to perform abortions, doctors must have admitting privileges at a local hospital. That restriction, plaintiffs in June Medical Services v. Gee argue, imposes an "undue burden" on the right to abortion forbidden by the 1992 case of Planned Parenthood v. Casey because it restricts access to abortion without protecting the health of women.

In June Medical Services, the district court made extensive factual findings that closing the other Louisiana clinics would impose a heavy burden on low-income women. It found that those who pursue abortions are disproportionately poor and closure of the clinics would force them to travel long distances.