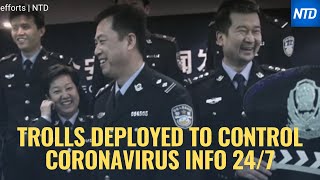 The article China Built Two Hospitals in 6, 9 or 10 days: Real, Fake, or Really Fake News published at OpEdNews on Thursday, March 26, 2020. The OpEd questioned the Time-lapse videos and the Chinese state media story of how the China Construction Third Engineering Bureau Co., a subsidiary of China State Construction Engineering Corp., could construct the Huoshenshan Hospital in 10 days (not 6, 8 or 9). The 269,000 sq. ft facility that included space for 1,000 beds was allegedly built by 1,000 project managers and 4, 5 or 6,000 Chinese who worked 24/7 utilizing "cutting-edge prefabricated building technology, to take COVID-19 patients.

I contacted project managers at two large-scale innovative construction companies who specialize in large, complex projects, and "embrace emerging technologies." They confirmed that the structures reported by the media and the infrastructure required could never be built in 10 days.

The project required a concrete foundation, and sewage, underground infrastructure to bring in water, electricity and an air supply electrical infrastructure and a specialized ventilation systems and double-sided cabinets that connect patient rooms to hallways and allow hospital staff to deliver supplies without entering the rooms as well as a video system that was installed in less than 12 hours that links the doctors to outside experts at Beijing's PLA General Hospital, according to the Yangtze Daily. The building even has infrared scanners to warn if any employees show signs of the disease's distinctive fever, and "medical robots" to deliver medicines and carry test samples. The hospital contains advanced technology and has a higher level of protection and isolation compared to existing infectious disease hospitals and includes an intensive-care unit and separate patient wards, consultation rooms, a decontamination room for ambulances, and medical equipment rooms not to mention a negative pressure ward, intensive care room, CT room, operating room and laboratory.

The story was so obviously fake, I did not address that the China Construction Third Engineering Bureau Co using prefabricated and modular construction, techniques for which China has become famous worldwide, built something in 10 days that in a little over 30 days were no longer needed because the number of new cases in China had fallen for weeks. China closes makeshift hospitals as COVID-19 cases plunge.

The makeshift temporary facility was China's biggest propaganda coup of the coronavirus outbreak because they claim they scored a major victory in its fight against the coronavirus by building two new hospitals, as a potent symbol of the government's drive to do what needed to be done.

The construction process itself was streamed by state-owned broadcasting companies and up to 18 million concurrent viewers watched the process. Nearly every major broadcaster in China reported from the site, publishing footage that you can watch here. Only limited detailed information and footage of the construction exists outside of China's state-owned broadcasters supporting my theory that the Chines government wants to manage and control the story.

The background music, typical in many Chinese state propaganda videos, suggests authorities are behind the fake story about the two Hospitals.

Wuhan was Locked Down

The Hospital was built in Huoshenshan during the time since the authorities locked it down, preventing residents from leaving and severely limiting public transportation and private cars. The coverage of Huoshenshan or "God of Fire Mountain" was constant - and constantly viral.

Related Topic(s): China; Coronavirus; Coronavirus Pandemic; Hospital; Outbreak; Propaganda, Add Tags
Add to My Group(s)
Go To Commenting
The views expressed herein are the sole responsibility of the author and do not necessarily reflect those of this website or its editors.