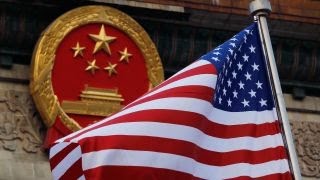 The New York Times ran an article last week with a headline saying that the 2020 Democratic presidential contenders faced a serious problem: "how to be tougher on trade than Trump." Serious readers might have struggled with the idea of getting "tough on trade." After all, trade is a tool, like a screwdriver. Is it possible to get tough on a screwdriver?

While the Times's headline may be especially egregious, it is characteristic of trade coverage which takes an almost entirely Trumpian view of the topic. The media portray the issue of some countries, most obviously China, benefiting at the expense of the United States. Nothing could be more completely at odds with reality.

China has a huge trade surplus with the United States, about $420 billion (2.1 percent of GDP) as of 2018. However, this doesn't mean that China is winning at the expense of the United States and because of "stupid" trade negotiators, as Trump puts it.

The U.S. trade deficit with China was not an accident. Both Republican and Democratic administrations signed trade deals that made it easy to manufacture goods in China and other countries, and then export them back to the United States.

In many cases, this meant that large U.S. corporations, like General Electric and Boeing, outsourced parts of their operations to China to take advantage of low-cost labor there. In other cases, retailers like Walmart set up low-cost supply chains so that they could undercut their competitors in the U.S. market.

General Electric, Boeing, Walmart and the rest did not lose from our trade deficit with China. In fact, the trade deficit was the result of their efforts to increase their profits. They have little reason to be unhappy with the trade deals negotiated over the last three decades.

This job loss not only reduced the pay of manufacturing workers, but as these displaced workers flooded into other sectors, it put downward pressure on the pay of less-educated workers generally. This is a pretty awful story, but it is not a story of China tricking our so-called stupid negotiators; it is a story of smart negotiators who served well the interest of corporations.

For some reason, the media always accept the Trumpian narrative that the large trade deficits the U.S. runs with China (and most of the rest of the world) were the result of other countries outsmarting our negotiators, or at least an accidental result of past trade deals. The media never say that large trade deficits were a predictable outcome of a trade policy designed to serve the wealthy.

The fact that trade is a story of winners and losers within countries, rather than between countries, is especially important now that our trade conflicts are entering a new phase, especially with China. While not generally endorsing Trump's reality TV show tactics, most reporting has taken the position that "we" in the U.S. have genuine grounds for complaint with China.

The complaints don't center on the under-valuation of China's currency, which is a problem for manufacturing workers. Rather, the issue that takes center stage is the supposed theft by China of our intellectual property.

While this sort of claim is routinely asserted, the overwhelming majority of people in the United States have never had any intellectual property stolen by China. It is companies like Boeing, GE, Pfizer and Merck that are upset about China not respecting their patent and copyright claims, and they want the rest of us to have a trade war to defend them.

If the goals of trade policies were put to a vote, these companies would be hugely outnumbered. However, they can count on the strong support of the media in both the opinion pages, and more importantly, the news pages. The issue is entirely framed in their favor, and dissenting voices are as likely to be heard as in the People's Republic of China.

There is a lot at stake in preserving the myth that ordinary workers were hurt as just an accidental byproduct of globalization. The story is that it just happens to be the case that hundreds of millions of people in the developing world are willing to do the same work as our manufacturing workers for a lot less money.

Dr. Dean Baker is a macroeconomist and Co-Director of the Center for Economic and Policy Research in Washington, D.C. He previously worked as a senior economist at the Economic Policy Institute and an assistant professor at Bucknell University. (more...)
Related Topic(s): China; China Energy Investment Corp; China Politics; Corporate; Economy; Jobs; Trade; Trade Deficit; Trump; Workers, Add Tags
Add to My Group(s)
Go To Commenting
The views expressed herein are the sole responsibility of the author and do not necessarily reflect those of this website or its editors.