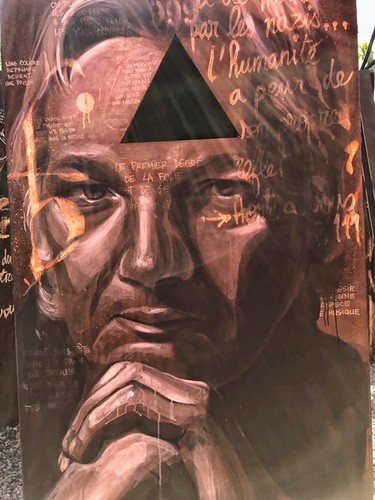 It doesn't matter what you think of Julian Assange personally; his personality is not on trial. He is facing charges for one thing only: publishing incontrovertible evidence of US war crimes in Iraq. If he is extradited to the US and convicted, then every single media outlet that publishes evidence of government wrongdoing will face the same threat. That is the point of his prosecution: to put a chill of fear into every journalist and editor who receives evidence of government crimes.

The extraordinarily brutal treatment Assange is getting even as his extradition hearing goes forward this week is part of the chilling process. Here's what any journalist who exposes state crimes has to look forward to:

"Day 2 proceedings had started with a statement from Edward Fitzgerald, Assange's QC, that shook us rudely into life. He stated that yesterday, on the first day of trial, Julian had twice been stripped naked and searched, eleven times been handcuffed, and five times been locked up in different holding cells. On top of this, all of his court documents had been taken from him by the prison authorities, including privileged communications between his lawyers and himself, and he had been left with no ability to prepare to participate in today's proceedings."

Throughout the hearing, Assange is locked in a glass box, forbidden any human contact. Meanwhile, the judge openly derides the defense, interfering with their presentation. Even so, their case was devastating. Using actual evidence from the US government itself, they demolished, point by point, the accusations put forward by the Trump administration.

The Trump lawyers claim that Assange told Chelsea Manning how to break into the classified computer files that she later released. Yet the US government's own evidence in its trial of Manning clearly showed she already had access to the files as did thousands of other personnel before she ever contacted Wikileaks. Wikileaks played no part at all in procuring the files, which is the heart of the Trump team's ostensible case.

The second element of the case involves Wikileaks' release of unredacted documents from Manning. The Trump lawyers claim that Wikileaks knew the release would put agents at risk but did it anyway. Here too the actual facts, again backed up by the US government's own evidence, are devastating. Wikileaks only published the unredacted files after writers from the Guardian had given away the secret encryption code in a published book despite Wikileaks' frantic pleas for them not to do this. After the Guardian writers had published the code, Wikileaks contacted the US government to warn them of the possible dangers. US officials did nothing, leaving agents exposed to any enemy who could now, thanks to the Guardian, obtain all the thousands of files. After the government failed to act, Wikileaks then published the already obtainable files so that any agent named in them could at least know what information was out there on them.

In any case, US government prosecutors themselves clearly confirmed in the Manning trial that, in the end, no US agents or personnel had come to harm from the release of the files. They also confirmed that Wikileaks informed the US government that the encryption code which Wikileaks had given to the Guardian when working together to release carefully redacted excerpts from the documents had been broken. It was the Guardian writers and their publishers who actually gave any potential enemy the keys to the classified files. By the US government's own admissions in a court of law, Wikileaks tried to stop the release of unredacted materials, then frantically sought to work with the US government to mitigate any harm, and only published them after they were already widely obtainable and again, only in order to mitigate any harm for agents who didn't know they'd been exposed by the Guardian writers.

In short, the Trump lawyers have absolutely no case for Assange's extradition. Their charges are transparently false, and are refuted by the US government's own evidence in previous trials. But in the end, this is not going to matter. The judge who is the sole decider in the case has clearly made up her mind. In one of several of her extraordinary interventions into the case, she declared yesterday that evidence of the United States government's own trial against Chelsea Manning could not be used as facts in the extradition hearing. Yes, you read it right. The facts established and accepted by the US government in court proceedings cannot be used as facts in a court proceeding involving the US government. The Trump prosecutors have taken the same line: "Yes, we know the US government confirmed these facts before, but we're saying that doesn't matter. The new facts are now the false facts we're presenting here."

I don't know how anyone can call themselves a journalist or just an ordinary concerned citizen of what are supposed to be the democracies of the United States and Great Britain and not feel a deep chill, and hot outrage, at these proceedings. American liberals turn a blind eye because Wikileaks published emails that embarrassed Hillary Clinton and they believe Assange is an unsavory character. But again, none of this has anything to do with Assange's personality or with Hillary Clinton or Donald Trump or Vladimir Putin or any of that. A publisher is being prosecuted for publishing incontrovertible evidence of government crimes. He is facing demonstrably false charges by a government that is openly dismissing its own previous admissions and evidence. He is being openly abused in the prison system. If this was happening to a publisher in Russia or China or Iran, there would be endless outrage across the Western media. But the extradition hearing is getting little or no coverage at all.

If Assange is extradited and convicted of these false charges, then we will have taken another giant leap down the road of authoritarianism. If this doesn't bother you, then please don't bother telling us what a "resister" you are.

Related Topic(s): Assange; Guardian; Media; Trial Lawyers; Trump Cruelty; Trump Lawyers; Truth; Wikileaks; Wikileaks Iraq War Documents Ii, Add Tags
Add to My Group(s)
Go To Commenting
The views expressed herein are the sole responsibility of the author and do not necessarily reflect those of this website or its editors.