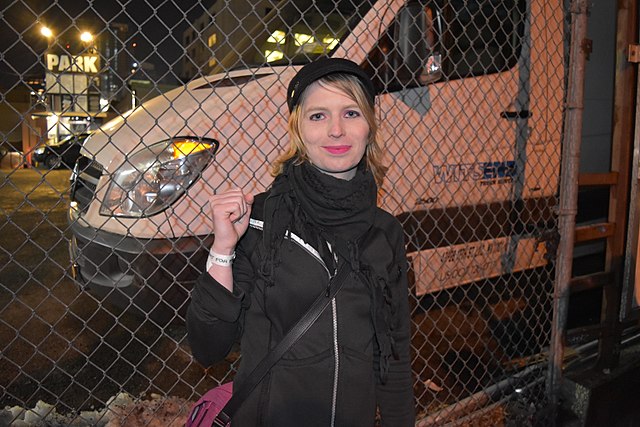 Chelsea Manning at protest in front of .A Night For Freedom.
(Image by (From Wikimedia) Manolo Luna, Author: Manolo Luna)   Details   Source   DMCA

One of the 21st century's greatest heroines is behind bars again, held in contempt by federal judge Claude M. Hilton for refusing to help prosecutors trump up charges against the journalists who published information she paid dearly for giving them.

Chelsea Manning spent more than six years in prison 854 days of it in pretrial confinement, violating the military's "speedy trial" maximum of 120 days for the fake "crime" of showing the American people evidence of actual crimes committed in our name by the US government.

President Barack Obama commuted her sentence three days before he left the White House. That, however, turned out not to be the end of her mistreatment at official hands.

Manning, who testified about her interactions with WikiLeaks during her illegal 2013 court-martial, refuses to do so again before a grand jury targeting WikiLeaks and its founder/leader, Julian Assange, for their work in bringing hidden truth to light. Under Hilton's order, she may be held for up to 18 months, or until the grand jury's term ends, or until she gives in. Her history says she won't do that.

Grand juries usually function in harness to the wishes of prosecutors. A defense lawyer famously told the Rochester Democrat and Chronicle in 1979 that "the district attorney could get the grand jury to indict a ham sandwich if he wanted to."

But in actuality, grand juries enjoy sweeping powers to look beyond what prosecutors show them. Should that ham sandwich or that prosecutor happen to attract their negative notice, they can indict the sandwich, or the prosecutor, whether the prosecutor likes it or not.

Federal prosecutors and judges are weaponizing the grand jury system to attack freedom of the press and freedom of information in support of a fortunately dying ethic of government secrecy. This particular grand jury should punish that behavior instead of rewarding it.

The grand jury should indict federal prosecutors Tracy Doherty-McCormick (who represented the government at the contempt hearing) and Gordon D. Kromberg (who requested the Manning subpoena) as well as their bosses for, among other crimes, conspiracy against rights (US Code 18, Section 241) and deprivation of rights under color of law (US Code 19, Section 242).

In the meantime, those who value truth, justice, and the American way owe Chelsea Manning a massive debt. One way to partially repay that debt is to contribute to her legal fund at click here. I hope you'll join me in doing so.

Related Topic(s): Chelsea Manning; Grand Jury; Political Prisoners; Wikileaks, Add Tags
Add to My Group(s)
Go To Commenting
The views expressed herein are the sole responsibility of the author and do not necessarily reflect those of this website or its editors.