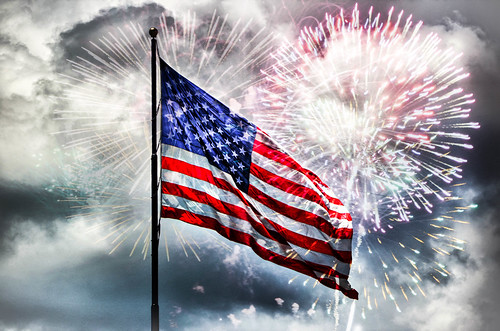 Celebrate July 4! Raise the colorful red, white and blue flag, the sight of which turns the stomachs of tens of millions of innocent people overseas, who lost loved ones, mass murdered in their own countries, often as not, in their very own homes, by American GIs 'serving' the good old USA.

On the fourth, sing loudly the Stars and Stripes National Anthem, which send chills down the spine of most families in Vietnam and Iraq who heard that melody as played by American military bands during the long bloody genocidal US occupation of their homelands.

On the 4th, sing proudly, 'God Bless America,' and chuckle over Obama's family pastor, Rev. Jeremiah Wright, who in 2007 was seen over and over again on TV crying out, "No, no, God Damn America for her crimes against humanity!"

On July 4th, 2018, keep your faith in the CIA and don't believe candidate Congressman Dr. Ron Paul MD, seen on prime time coverage of the 2012 GOP presidential debates stating calmly, "All the invasions and bombings by the US overseas, beginning with Korea, were illegal, unconstitutional and a horrific loss of human lives."

While watching and cheering the men and women military parading on the Fourth of July, as they are expected to do, try to forget that a renegade former US Attorney General Ramsey Clark wrote and repeats, "US foreign policy is the greatest crime since World War Two."

And now we turn away from Americans celebrating the birth of their nation and away from their fellow First Worlders in Europe, Canada, Australia and New Zealand. We turn instead to offer a cautionary to the six billion men, women and children of that Majority Humanity that is condescendingly labeled the Third World or Developing World - a world still targeted for genocidal plunder by the banks, armies, secret services and media of the First World.

Majority humanity must not wait for Americans to free themselves from the deception, egoism, ignorance and violence that is seeded and psyoped into the minds of Americans as children to justify killing tens of millions of poor to 'protect US interests overseas,' Wall Street's criminal interests, the predatory investments of the powerfully wealthy. All the genocides 1776 - African Slaves, Native Americans, Mexicans, Filipinos and Chinese before 20th century were followed by US bankrolled WWI and WWII genocides and has continued to engulf most all the nations previously under European or American military colonial occupation through today's US NATO UN genocide in the Middle East pale by comparison to the end of life on Earth, being anticipated as an unfortunate risk during a meticulously planned nuclear World War III.

Those of us in the belly of the beast so to speak, await with great anticipation the voices that will arise from the presently economically enchained and militarily threatened Majority Humanity in a future multipolar world in which Chinese civilization will arise to sane influence in all areas of power.

Related Topic(s): Capitalism Over Humanity; Fourth Of July; Genocide; Philippines Genocide, Add Tags
Add to My Group(s)
Go To Commenting
The views expressed herein are the sole responsibility of the author and do not necessarily reflect those of this website or its editors.