"Cotler, Cotler, you will see Palestine will be free"

Last week members of Quebec Movement for Peace disrupted a speech by Irwin Cotler on "Canada as a Human Rights leader" (at the last-minute 'deputy' foreign minister, Rob Oliphant, canceled his participation).

With "Free Palestine" signs in hand, filmmaker Malcolm Guy and I took the stage to denounce Cotler's anti-Palestinian positions and support for intervention in Venezuela and Iran.

After we were ushered off the stage lawyer Dimitri Lascaris rose to interrogate the supposed human rights activist for refusing to criticize injustices inflicted upon Palestinians. Part of the way through Lascaris' grilling a handful of us at the back of the room began chanting "Cotler, Cotler, you will see Palestine will be free", as one can hear in this video viewed over 10,000 times.

The Electronic Intifada, Media Coop, Algemeiner and Canadian Jewish News (twice) reported on the intervention (CPAC was purportedly live streaming the event). Prominent anti-Palestinian activists such as Gerald Steinberg, Hillel Neuer, Avi Benlolo and Bernie Farber decried our challenge of their hero. Head of the Canada Israel Interparliamentary Group (CIIG), Michael Levitt created the Twitter hashtag StandWithCotler and called on other MPs to support it, which was duly followed by his CIIG colleagues, including disgraceful NDP MP Randall Garrison. In the House of Commons CIIG Vice-Chair David Sweet asked the government to condemn our disruption of Cotler. The Conservative MP noted, "on Monday he was disrupted and berated during a speech at Concordia University in an attempt by protesters to shut him down." (After 10 minutes we voluntarily left the room and Cotler spoke extensively.) Parliamentary Secretary to the Minister of Foreign Affairs Oliphant, who was scheduled to speak alongside Cotler, expressed the government's solidarity with the former Liberal party justice minister. 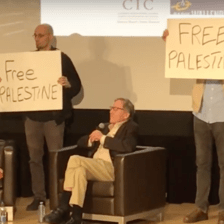 Cotler is a vicious anti-Palestinian who aggressively criticizes "enemy" states while largely ignoring rights violations committed by Canada and the US.

In "Canadian apologist for Israeli war crimes nominated for Peace Prize" I detail Cotler's long-standing devotion to Israeli violence and recent promotion of war on Iran and regime change in Venezuela. But, since that story was published in March more details have emerged about Cotler's ethno-centrism and promotion of violence. In recent days Cotler has been widely quoted criticizing the use of the term "genocide" in the Final Report of the National Inquiry into Missing and Murdered Indigenous Women and Girls.

In response to our action activist Ron Saba shared a photo of Cotler at last year's Jewish National Fund fundraiser in Toronto. The explicitly racist JNF excludes the 20-25% of non-Jewish Israelis from its vast landholdings mostly stolen from Palestinians in 1948. In 2017 the Canada Revenue Agency initiated an (ongoing) audit of the JNF for supporting the Israeli military in contravention of Canadian charitable law.

For his part, Masud Sheikh responded to our action by uploading a video apparently scrubbed from the Internet after previously reaching a Canadian audience of the Nobel Peace Prize nominee advising Israel on planning a war. Just after Israel killed 1,200 Lebanese in the summer of 2006 Cotler spoke to a conference of top Israeli military officials on the importance of managing the message in modern war.

He did something similar after an earlier Israeli invasion of its northern neighbour. In an April article retired Guelph professor Michael Keefer wrote:

"In the wake of Israel's 1982 invasion of Lebanon, in the course of which some 15,000 civilians were killed and several thousand Palestinians massacred in the refugee camps of Sabra and Shatila, Cotler participated in a 1984 Jerusalem conference on Hasbara: Israel's Public Image. Alluding to two of the lesser PR disasters of the warthe IDF's violation of the Canadian ambassador to Lebanon's diplomatic immunity, and a Canadian Red Cross doctor's allegations of Israeli atrocities Cotler recommended, not that Israel change its behaviour, but rather that it 'make Hasbara a priority' and enhance its capacity to offer 'an authoritative rebuttal' to such stories."

In that article Keefer points out that Antony Lerman, founding editor of Antisemitism World Report, called Cotler "one of the key figures" promoting the idea of a "new antisemitism". Since the 1970s he's been arguing that criticism of Israel is the "new antisemitism".

In a remarkable 2002 essay titled "Human Rights and the New Anti-Jewishness" Cotler lays out his thinking, suggesting a confrontation between the "secular religion" of human rights and Jewish "civil religion" of Zionism.

He argues that criticizing Israeli human rights violations is "the contemporary analogue to the medieval indictment of the Jew as the 'poisoner of the wells.' In other words, in a world in which human rights has emerged as the new secular religion of our time, the portrayal of Israel as the metaphor for a human rights violator is an indictment of Israel as the 'new anti-Christ' as the 'poisoner of the international wells' encompassing all the 'teaching of contempt' for the 'Jew among the Nations,' this new antisemitism implies."

Cotler further argues that antisemitism has retained its consistent essence as "an assault upon whatever is the core of Jewish self-definition at any moment in time, be it the Jewish religion at the time of classical antisemitism, or the State of Israel as the 'civil religion' of the Jewish people under this new anti-Jewishness." So, because most Jews identify with Israel criticizing that country's violence or dispossession of Palestinians is anti-Semitic.

Challenging Cotler is important. All high-profile anti-Palestinians should be asked tough questions and hopefully our intervention inspires others to take similar actions. But, it's also about de-mystifying an individual who retains a progressive gloss. Last month NDP MP He'lène Laverdière and Green Party leader Elizabeth May attended a press conference organized by Cotler calling on Canada to impose sanctions on Iranian officials and list the country's Revolutionary Guard as a terrorist organization. New NDP foreign critic Guy Caron participated in a subsequent event on Iran and NDP MP Murray Rankin and May regularly attend events led by Cotler. May and Rankin are also part of the Cotler-led Raoul Wallenberg All-Party Parliamentary Caucus for Human Rights.

The Cotler 'brand' should be toxic on the Left. Politicians need to know that many Canadians as Lascaris put it in his concluding statement to Cotler consider him "a fraud when it comes to human rights."

Related Topic(s): Israeli Protests, Add Tags
Add to My Group(s)
Go To Commenting
The views expressed herein are the sole responsibility of the author and do not necessarily reflect those of this website or its editors.