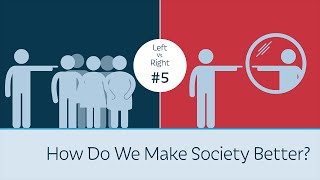 How Do We Make Society Better? Left vs. Right
(Image by YouTube, Channel: PragerU)   Details   DMCA
>

"Where is the leftwing when we need it?" is a question I have asked at times. Some of my readers who confuse the left with Antifa and Identity politics have been confused by my question. Why, they ask, do I want more Antifa thugs and Identity Politics hatred of white people?

It was Karl Marx who said: "Workers of the world unite; you have nothing to lose but your chains."

Does my call for a resurrected leftwing mean that I am a Marxist?

No. It means I agree with John Kenneth Galbraith that without countervailing power, the economic-social-political system goes out of balance, as the United States clearly has. In a short period of time the distribution of income and wealth in the US has gone from reasonable to unreasonable. Working and middle class wages, salaries, and job opportunities have declined. But irresponsible corporate jobs offshoring and irresponsible Federal Reserve inflation of the prices of financial assets have caused the income and wealth of the One Percent to reach fantastic levels.

A handful of people have more wealth than 100 million Americans. Democracy is forfeited as Congress responds to a handful of people and to a handful of powerful organized interest groups. A tax cut designed to increase the inequality has just passed Congress at a time of the worst income and wealth distribution in our history. (See, for example, here) Instead of addressing the dire situation, Identity Politics goes after white people and President Trump for being allegedly elected by the white working class.

It is possible that Identity Politics has condemned the world to nuclear Armageddon by lining up the liberal-progressive-left with the military/security complex's "Russiagate" attack on President Trump. As I have explained, the purpose of Russiagate is to prevent Trump from normalizing relations with nuclear superpower Russia and defusing the dangerous tensions that have been built up by reckless and irresponsible US government actions against Russia. On many occasions I have explained the world threatening consequences of Washington's demonization of Russia and its leadership. (See here, for example)

Without a strong and united working class there is nothing to balance corporate power. Capitalist greed ends up destroying itself by destroying working class income and consumer purchasing power. Greed then turns on public assets demanding that they be privatized or opened for looting as is now happening to protected national monuments and the Arctic National Wildlife Refuge.

With the working class marginalized, now it is the influence of the environmental movement that is being rolled back. Next it will be Social Security and Medicare as the ruling oligarchy pushes the social system back to the era before the New Deal. In the absence of countervailing power, there is no limit to the unwinding of the reforms that made capitalist America a liveable society.

To prevent this we all have a stake in the resurrection of the American left.

Related Topic(s): Antifa; Left Versus Right; Politicians; Politics, Add Tags
Add to My Group(s)
Go To Commenting
The views expressed herein are the sole responsibility of the author and do not necessarily reflect those of this website or its editors.