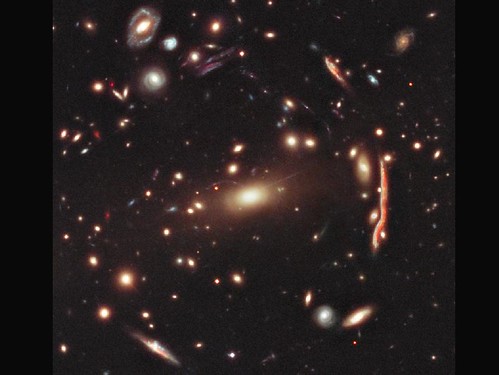 Of course it can be.

It is quite simple really.

Let us see as to whether empirical science makes it possible to prove once and for all that this world is nothing more than a chimera, a mirage and an illusion.

Neo scientists, not all of them of course, and all the atheists state that life on earth, we humans included, are but a self-induced accidental bio-chemical fallout of some 14 billion year old big-bang of an atomic explosion. And nothing more than this.

In short, rationalists hold that we humans are perhaps no more than mere atoms!

But what is an atom? Is it a solid entity, and hence, real as such?

From all collected scientific data it is made clear to us that an atom is structurally so unstable that it is more a non-entity that a permanent entity. That is, it is more an illusion of solidity than a reality of an unchanging solid entity. This is because as per its inherent nature, the atom is simultaneously and automatically breaking and re-forming at the rate of 10, 0000000000000000000000 (10x 22 zeros) times per second.

In other words, as the blades of a fast moving fan look like a oneness of something or an unbroken thing of sorts, similarly, the atom appears to be solid owing to fact that it is breaking and then re-forming so very fast that the naked human eye cannot in real time catch this constantly occurring transitory phenomenon: of the constant forming-breaking of the atomic structure.

Consequently, we see the atom, and therefore ourselves as a solidity. That is, owing to this reason we as a human entity that is supposedly composed of 7 octillion of the same (and similarly is the world or the universe so made) is seen by the naked eye as a permanent entity in real time rather than an impermanent non-entity it is in fact in reality and in truth.

Therefore, the atomic 'thing' of which we humans and our universe is supposedly 'made-up' of - as per the propagation and postulation of the Neo-rationalists or Neo-atheists - it, atom, is itself merely a non-permanence, an impermanent phenomenon, an illusion!

Thus, the percentage of atom which is known to us or believed by us to be solid, though a non-solid in scientific terms, is for most part - ninety nine point nine-nine percent to be precise - a nothingness and a seemingly ever disappearing and reappearing ghostly appearance. Alternatively, only 00.01% of the atom is seen by us as a visible empirical solidity; which, in turn, is in fact only an alluring illusion!

Also, scientifically, at this present time, of the visible universe we can only see 4%.

It may thus be said that present day science does not know much. In fact, as to what 96% of the universe looks like or is in fact, science has no finding or proof as such.

Of the 4% that is visible to us of the universe, its atomic composition to the tune of 99.99% is unknown to us! That is, we know only 0.01% of the atom. This known minuscule apparent solidity of the atom too is breaking and forming constantly. In other words, it too is just a wave-energy of sorts, and equally unreal.

Related Topic(s): ATHEIST; Consciousness; Energy; Illusion; Metaphysics; Reality; Science; Time; Time; Truth; (more...) Universe, Add Tags  (less...)
Add to My Group(s)
Go To Commenting
The views expressed herein are the sole responsibility of the author and do not necessarily reflect those of this website or its editors.