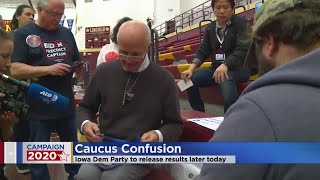 We shouldn't be surprised that the Iowa Caucus has blown up into a fiasco. It is a primary that was designed to give a result the ruling duopoly parties each want, and Sanders, according to the polls, has been screwing it up for the Democrats by looking increasingly likely to win the nomination. Let me explain:

We've heard ad nauseum that the Iowa caucuses that are the first test of actual voters picking a presidential candidate each four-year election cycle are important because they have a record of correctly identifying the candidates who go most often to on to become the two parties's nominees and ultimately, in the case of one of them, the president of the country.

The trouble is, that's the trouble with the Iowa caucus, they are designed to pick the candidates that the major parties prefer.

Iowa is not representative of American voters' diversity

Start with the reality of Iowa. It is in no way representative of America. Not in the slightest. Largely rural, the state's largest city, Des Moines, only has 207,000 residents. That population count wouldn't even place it in the top 20 cities in California, where Des Moines would be smaller than the towns of Oxnard and Moreno Valley two places you've probably never heard of outside of California, unless it's about a forest raging fire nearby. Iowa's also a state that doesn't have many people in it who aren't white. According to the most recent census data, Iowans are 90.28% white, 3.51% black and 2.40% Asian. Native Americans only represent 0.037% of the state's 3.18 million residents. That compares to a national racial breakdown of 60.4% non-Hispanic White, 18.3% Hispanic (which includes white Latinx people), 13.4% black or African-American, 5.9% Asian, 1.3% indigenous (American Indian or Inuit), and 2% inter-racial.

The idea that such a state could be considered representative or predictive of the general US electorate, much less the Democratic Party electorate, is absurd on its face. If Democrats (or Republicans for that matter) really wanted a representative state to test out their prospective presidential candidates, they'd pick one like Ohio, that pretty reliably swings both ways, and votes for the party candidate who ultimately wins the White House. What the party's are doing in Iowa through it's arcane caucus process is manipulating the outcome to get the candidate they want to run. (Granted it doesn't always work, but better than far more democratic and less manipulatable primaries do.)

Caucuses are not more democratic than primary voting

But then the caucus process itself is ridiculous. First of all the Iowa caucus operates on a principle that is the opposite of the way nearly all states' elections operate (including Iowa's), which would be winner-takes-all. In a typical primary, voters go into a private booth and cast secret votes for the candidates of their choosing for each office, from president on down to justice of the peace and town constable. In the Iowa caucus, they vote publicly for the candidate of their choice by grouping in a room in a space for people supporting their chosen candidate. Ballots are filled out for that candidate and collected. Then once those numbers are tabulated and the totals are announced, caucus-goers get a second chance to vote and if they wish, can transfer their support to one of the candidates who is most competitive. The idea, supposedly, is that if your chosen candidate is clearly going to lose, you may want to support one of the top candidates whom you like more, or dislike less.

This process involves a lot of cajoling, debating and perhaps more sordid negotiation .(Are promises of sexual favors, money, a free dinner, or whatever permitted? Probably, but we don't know, which is the point). Finally the new second-round votes are counted, and then delegates are allocated. This might make sense if our elections were done on the basis of preference voting, where people list their choices for candidate in order of preference: first choice, second choice if the first choice doesn't win, and maybe third choice if the second gets knocked off, and so on. But that's not how we in the US do things. So this second round of voting in Iowa makes no predictive sense at all in terms of candidate viability in a general election. So why do it?

The Iowa caucus is also terrible for another reason. The process is so cumbersome and time-consuming even in good times, that turnout is typically under 15% of registered voters. Many Iowans simply cannot spend hours locked in a high school gym on a work-night. In the current caucus, where the process collapsed because of a failed phone app used for counting votes, many people reportedly went home early.

So let's look what happened last night in Iowa. This year, the system was changed so that if a candidate in a caucus location received more than 15% of the votes in the room, those votes became "locked in." Voters in that group are not permitted to vote for a different candidate in the second round of voting. Only those whose candidates did not make it to the 15% level could opt to change their votes to another candidate. That might seem reasonable, but the recording and counting system for this whole operation, which involved a smart-phone app (more about that later), reportedly failed abysmally.

I noticed this at once when reports began to come in saying that the caucus vote reporting was in chaos. I went to the New York Times early in the evening and read an article from a Times correspondent in Iowa, Nick Corasaniti, which included the results of a single caucus site. It showed Bernie Sanders with a first ballot total of over 1900 votes, which was 600 votes more than the total of less than 1300 votes received by Pete Buttigieg, who was second. The remaining major candidates, Biden, Klobuchar and Warren were all listed at around 15% with, if I recall right, only Warren over the threshold for being counted in the second round. But where it got bizarre was the tally for the second round of voting. There, Sanders' total had shrunk to 1385 votes, while Buttigieg saw his total rise to nearly that level. I cannot remember where all the votes for Sanders went. They seemed to just disappear. But what Corasaniti didn't even bother to mention was that since Sanders had won 1900 votes in the first round, all of those votes were supposed to have been "locked in." Under the rules in place for this caucus, candidates whose first vote totals passed the 15% threshold should only have seen their vote total stay the same or rise, not fall.

If that one report from one caucus site (which has been taken down by the Times now with no explanation), was indicative of the problems that were showing up across Iowa, this looks like something much worse than a glitch. Coming as it does after a bizarre cancellation by CNN and the Des Moines Register of a final supposedly "gold standard" poll of Iowan voters the day before the caucus (a decision based on a report by a single Buttigieg supporter that a pollster calling him from the polling agency had offered a list of candidates to choose from that omitted Buttigieg's name), I would say that the whole Iowa caucus this year should be questioned, no matter what kind of result gets reported at this point.

Related Topic(s): Democratic National Committee; Iowa Caucus; Sanders Scenario The Probable Path To The Nominati, Add Tags
Add to My Group(s)
Go To Commenting
The views expressed herein are the sole responsibility of the author and do not necessarily reflect those of this website or its editors.