When San Diego District Attorney Summer Stephan indicted 11 people associated with the A3 Education for running a "criminal enterprise [that] funneled millions of taxpayer dollars into private bank accounts", he exposed gaping holes in the laws controlling the oversight of publicly funded charter schools. As detailed in a letter he sent to the California State Assembly's education committee, this left the government vulnerable to fraud in the following ways:

As proposed, AB1316 would have addressed many of these issues and protected California students from having their scarce education dollars stolen by unseemly charter school operators. Its provisions would have created an Inspector General in the Department of Education and "new auditing and accounting standards to create parity between school districts and charter schools." Non-classroom-based charter schools would have had their funding formulas adjusted to reflect that these schools do not have the real estate costs that are incurred by charter and public schools that teach in-person classes. Charter schools would no longer have been able to shop around for school districts that provided the least amount of oversight as they would have been forced to obtain authorization in the districts where they were operating. Students enrolled in independent study programs would have received more teacher contact.

Unfortunately, AB1316 was placed in the inactive file by a political system unwilling to risk the wrath of the California Charter School Association. The status quo will continue leaving education funds at risk to theft by people like the ones indicted in the San Diego case:

"A lawyer for another defendant, Justin Schmitt, wrote in an email that his client did not intentionally engage in wrongdoing and charter school law is open to interpretation." - The San Diego Union-Tribune

Some of the loudest voices against passing the measure to bring accountability to charter schools were homeschooling parents who have been beneficiaries of loopholes in the charter school law. As homeschoolers, their children were considered to be private school students and not eligible for any state funding. However, by enrolling their students in a "home school charter", these parents would receive a stipend from the charter school which was a fraction of what the school received from the state. Enforcement by the government was so lax that parents were using this public money "to buy multi-day Disneyland Park Hopper passes, San Diego Zoo family memberships, tickets to Medieval Times and dolphin encounters at SeaWorld."

AB1316 would have reduced the funding that these "home school charters" received and reduced their profit margins. The schools still would have been allowed to operate, but with more oversight than they have been accustomed to receiving. However, with less money available to bribe homeschooling parents to participate, their ability to attract students would have been severely curtailed. 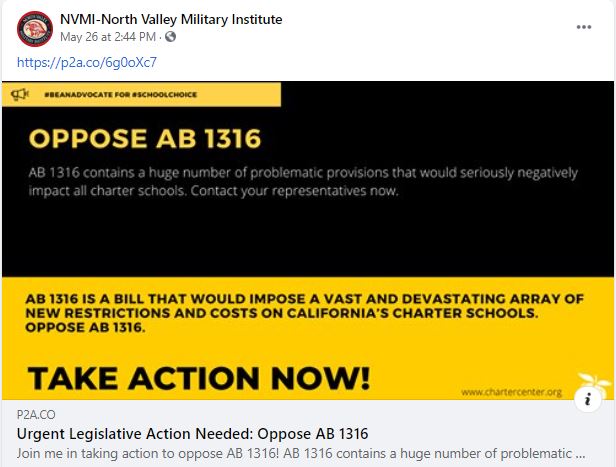 (Image by North Valley Military Institute)   Details   DMCA
Also opposing AB1316 were charter schools like the North Valley Military Institute (NVMI). Under current regulations, this charter school was able to hire an auditor who did not challenge their violation of California education law by charging students to attend summer school. This auditor also did not seem to notice that the school was breaking the labor code by having parents and students work off the debt for attending summer school at a rate that was less than the minimum wage.

Even worse, NVMI was able to avoid proper disclosure of a lawsuit against the school alleging sexual abuse by an administrator who lived in the same house as the school's Executive Director. Away from the prying eyes of the public or regulators, the school is accused of refusing to report the alleged abuse to authorities as required by law and of retaliating against parents who made the complaint by "intentionally and maliciously [filing] false reports of child abuse [by both sets of parents] with the Department of Children and Family Services". The school continues to co-locate on an LAUSD campus in Kelly Gonez's board district.

The charter school industry was created with the promise that these publicly funded private schools would be an improvement over public schools. They need to be held accountable for this promise with strict oversight that is unobtainable under the current law. AB-1316 would have taken a huge step towards fixing this, but the California legislature refused to put #KidsFirst. The ability of these schools to defraud our students will continue.
________________________________