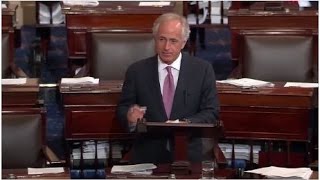 Every so often in American history Congress is called upon to play a defining role on matters of war and peace, pursuant to its constitutional duties and the national security needs of the time. Now is such a moment.

Corker's soft spoken but Churchillian warnings about the national security dangers that concern him about the presidency of Donald Trump should be thoughtfully considered. Many leaders of allied nations are deeply worried about the capability of our commander in chief. The chairman of the Foreign Relations Committee worries he could trigger World War III. The secretary of State reportedly referred to him as a moron. Officials at high levels in his administration reportedly collaborate to mitigate the dangers caused by the president's uninformed and impulsive instincts and actions.

It is high time for Congress, and particularly the Senate, to rise to the occasion on matters of war and peace as discussed below.

During the Vietnam War Sen. William Fulbright, a Democrat from Arkansas and chairman of the Senate Foreign Relations Committee, convened 11 days of hearings in 1971 that brought together leading voices on national security to consider proposals to end that war.

The Fulbright hearings made a seminal contribution to American foreign policy. It would be a profound service to the nation if Chairman Corker and Chairman McCain would convene the Senate Foreign Relations and Armed Services committees for joint hearings about critical matters of war and peace that create significant dangers to the nation and those who serve her.

The purpose of these hearings would be to seek honest and unvarnished advice, from respected national security voices from inside and outside the Trump administration, about the dangers in the world and the wisest American response to them.

Regarding Russia, these hearings would not address any investigation now in progress but would discuss and dramatize the continuing war against American democracy from a Russian dictator and the successors to the KGB under his command, which is so comprehensive and aggressive it constitutes a cyberwar and espionage Pearl Harbor attack against us.

It is a crime against common sense, and a danger to our security, that our commander in chief refuses to acknowledge that this attack against us has begun and falsely claims those who investigate the crimes or protect us from their danger are spreading fake news or acting like Nazi Germany. The hearings proposed here would fully and accurately describe the threat and intelligently discuss the proper American response.

Active duty and retired commanders of the military services would testify at these hearings to offer clear and sound military advice on matters including threats from Russia, cooperation with our democratic allies, dangers on the Korean Peninsula, nuclear weapons strategy and the nuclear agreement with Iran.

Secretary of State Rex Tillerson and Secretary of Defense James Mattis would testify, alongside former secretaries of State and Defense who served presidents of both parties and leading experts in foreign policy and national defense. White House chief of staff John Kelly and national security adviser H.R. McMaster could be cordially invited to share their well-informed views if they would welcome the opportunity to offer them.

It would be invaluable for the nation to witness lengthy, in-depth, nonpartisan and high visibility hearings during which internationally respected Americans would discuss at length the threats facing the nation and how we should, and should not, address these threats.

It does no service to our security when the presidency is reduced to insulting tirades attacking first team players who shape the policies that protect our nation. It would be an historic service to the nation -- and the president -- for Congress to begin a deep and informed discussion of war and peace at this very dangerous moment.

Related Topic(s): Advice; Congress War Oversight; Congressional Hearings; Peace Talks, Add Tags
Add to My Group(s)
Go To Commenting
The views expressed herein are the sole responsibility of the author and do not necessarily reflect those of this website or its editors.