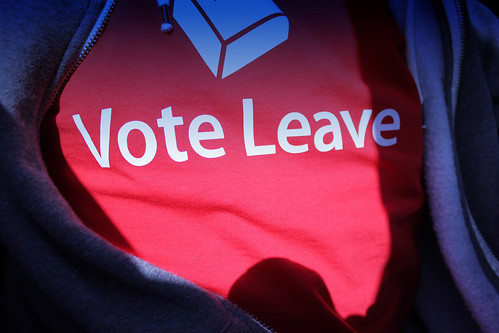 The vote last month by the United Kingdom to leave the European Union (EU) caught most people by surprise. Even many supporters of the referendum seemed surprised, having prepared post-election speeches explaining their defeat and pledging to fight on. While it appears there are still some ways that the Brexit may be prevented, the vote clearly expressed an enormous amount of discontent with the status quo.

Many commentators have focused on racism and xenophobia as major factors in the move to leave the EU. Undoubtedly these were important considerations. Many people in England, especially older ones, are uncomfortable with the country becoming more diverse. They fear and resent the people coming in from the Middle East, Asia, Africa, and elsewhere.

But racism and xenophobia are not new for the United Kingdom. What is new is that these forces are powerful enough to force the country to break with a political union it joined more than four decades ago. Needless to say, there have been other situations where such forces came to dominate politics and they have not ended well.

The issue in the UK and elsewhere is that there are real grievances which demagogues have been able to exploit. First and foremost is the austerity that had curbed growth in the U.K. and cut back funding for important programs. While austerity has not been as severe in the U.K. as in the euro zone (the U.K. is not in the euro), the conservative government sharply cut government spending in 2010, ostensibly out of concern that deficits and debt were harming the economy.

The result has been six years in which growth has averaged less than 2.0 percent, allowing the country to recover little, if any, of the ground lost in the recession. Furthermore, as a result of the weak labor market, real wages in the U.K. are lower today than they were before the crisis.

These arguments did not make much sense. The government of the UK could have spent more money on the national health care system (NHS) if it chose without leaving the EU. Its cost of long-term borrowing was around 1.0 percent, while inflation was less than 1.0 percent. There is no effective restriction on the government's ability to spend; the NHS will be as good as the government wants it to be.

Nonetheless the Brexit argument carried today. This should have the EU leadership thinking about their own economic policies. While EU leaders some are plotting ways to punish the UK so other countries don't also consider leaving, it would be more productive if they starting asking why people would want to leave the EU in the first place? And the economy is a good place to start.

As bad as the UK economy has been, the economies of the euro zone countries look much worse. Many have not come close to recovering their pre-recession level of output. France and Italy are both struggling with unemployment rates of close to 10 percent, while Spain has an unemployment rate close to 20 percent. This weakness is due to the same love of austerity.

As in the case of the UK, there is no justification for the austerity. Interest rates are low across the euro zone, with 10-year government bonds mostly paying well under 1.0 percent. In the case of Germany the interest rate is negative: investors are effectively paying Germany to lend it money. Similarly, inflation in the euro zone countries has been hovering near zero ever since the recession.

This is a situation that cries out for stimulus. The euro zone countries could take advantage of the low borrowing costs to build up their infrastructure, pay for energy conservation measures and/or clean energy, and improve their education and health care systems. This policy would both boost the economy in the short-run and increase productivity and output in the long-run.

But the leadership of the euro zone, especially the Germans, seems intent on continuing austerity. This is not based on economics -- there is no serious support for their position -- it is based on things their parents told them about the virtues of balanced budgets.

If the EU leadership continues to set policy based on folk wisdom from their parents rather than serious economics, the hardships among the population will continue. And this environment will make for a receptive audience for the demagogues. After all, at least they have policies that they claim will improve people's lives. That has to sound better to many voters than more of the same.

This is a recipe for more countries leaving the EU. That will not be a good story, but if it does happen, the EU leadership will have itself to blame.

This article originally appeared in The Hankyoreh.

Dr. Dean Baker is a macroeconomist and Co-Director of the Center for Economic and Policy Research in Washington, D.C. He previously worked as a senior economist at the Economic Policy Institute and an assistant professor at Bucknell University. (more...)
Related Topic(s): Austerity; Brexit; Economy; European Union, Add Tags
Add to My Group(s)
Go To Commenting
The views expressed herein are the sole responsibility of the author and do not necessarily reflect those of this website or its editors.