And that should be disqualifying. 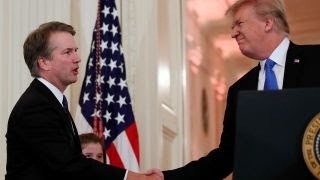 Senator Jeff Merkley was right about the problem with any nomination Donald Trump was going to make for the Supreme Court at this low point in the president's troubled tenure. "A President under investigation should never be allowed to appoint a Justice to the Supreme Court," the Oregon Democrat argued before Trump announced on Monday night that he had selected federal judge Brett Kavanaugh to fill the vacancy created by the retirement of Justice Anthony Kennedy.

Merkley's objection was generally appropriate, in light of the ongoing inquiry by special counsel Robert Mueller into wrongdoing by the president's associates -- and, potentially, Trump himself. But it is especially appropriate with regard to Kavanaugh.

A former staff secretary in the Executive Office of the President of the United States under President George W. Bush, Kavanaugh now serves on the United States Court of Appeals for the District of Columbia Circuit. He is a rigid right-wing ideologue who, if confirmed, would move the court far to the right. "The president pulled Judge Kavanaugh's name from a pre-approved list concocted by radical, far-right special interests that are committed to undermining a woman's right to choose, health care protections, safeguards for workers and seniors, LGBTQ rights, and a host of other critical public protections that touch the lives of every New Mexican and every American," explains Senator Tom Udall (D-NM). "These extreme groups put Judge Kavanaugh's name on their list for a reason."

But believers in the rule of law should be concerned that something else about this nominee appealed to Donald Trump. Kavanaugh has been an open advocate for precisely the sort of imperial presidency that the founders of the American experiment feared -- and that Donald Trump relishes.

There is open speculation that Trump's grip on the presidency is threatened by the special counsel's investigation. But the high court could avert that threat. And Trump has every reason to believe that his nominee could tip the balance of a closely divided court in his favor. As Bloomberg News has noted, "Kavanaugh addressed some of the constitutional issues that could emerge from an investigation like Mueller's in a 2009 Minnesota Law Review article." What Kavanaugh wrote three years after he assumed his current position on the DC Circuit ought to trouble everyone who believes that the president is a servant of the people, rather than "a king for four years."

Related Topic(s): Accountability; Impeachment; Judge Brett Kavanaugh; Mueller Investigation; President Trump; Rights, Add Tags
Add to My Group(s)
Go To Commenting
The views expressed herein are the sole responsibility of the author and do not necessarily reflect those of this website or its editors.