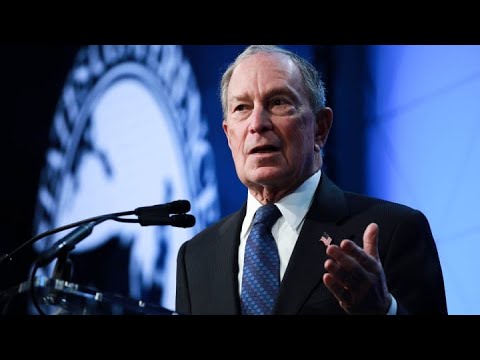 If, somehow, Bernie Sanders is allowed to win the nomination, Michael Bloomberg and other plutocrats will have created a Democratic Party machinery purpose-built to defy Sanders -- as nominee, and even as president.

The oligarchy has awakened to the threat to its dictatorship from the left-most ranks of one of its own corporate parties. Michael Bloomberg, the eighth richest man in the world and former three-term mayor of New York City, has vowed to spend unlimited cash to defeat Donald Trump. But Bloomberg's real mission is to retain oligarchic control of the Democratic Party, the corporate mechanism that squats like a giant toad on the most ethnically and ideologically diverse half of the U.S. population, including virtually all Black electoral politics.

Bloomberg threw his hat and billions into the race when it became clear that corporate surrogates Joe Biden and Pete Buttigieg could not be depended on to halt Bernie Sanders, the purported socialist who now leads the Democratic pack. Joe Biden's aura of electability, which was always a media-invented mirage, evaporated when he collapsed into the basement in Iowa and New Hampshire. The Black voters of South Carolina are his only hope for resurrection. But Blacks don't back Biden for ideological reasons, or even on the strength of his service as Barack Obama's number two. Older (and scarier) African Americans were under the impression that Biden was the Democrat best equipped to beat Trump -- but it turns out he can't even beat previously unknown Democrats.

Some of those Black Biden supporters will now switch to Bloomberg, believing he is the one Democrat rich enough to drown Trump in November. Blacks don't vote their own ideological preferences in Democratic primaries. Rather, many will support whomever they perceive as the strongest opponent against the White Man's Party, the Republicans. That invariably means the Democrat favored by corporations and their media. Thus, the duopoly system effectively negates the core political aspirations of Black America, the most left-leaning constituency in the nation. The duopoly is a trap that neutralizes independent, progressive Black politics -- a mechanism to force Blacks to vote their fears, rather than their aspirations.

However, as BAR senior columnist Margaret Kimberley points out in this issue, there are threats to Black lives and rights even worse than the flaming orange racist now squatting in the White House. As three-term mayor of New York City, Bloomberg increased the frequency of his predecessor Rudolph Giuliani's stop-and-frisks by 700 percent . Although real estate magnate Donald Trump infamously called for the death penalty for the Central Park Five, it was Mayor Bloomberg who for years delayed payment of a $41 million settlement to the grievously wronged young Black men. And Bloomberg was the nation's most aggressive, unrepentant ethnic cleanser, gleefully removing more Black and brown people from the city's five boroughs than any of his predecessors.

Mayor Bloomberg was not yet in the top tier of billionaires, but he was busy creating a paradise for the super-rich at the expense of Harlem, Bed Stuy and the South Bronx. In Bloomberg's world, gross income inequality is wondrous. "If we could get every billionaire around the world to move here, it would be a godsend that would create a much bigger income gap," said the mayor. Even Giuliani was more discreet than to gush at the mass expulsion of fellow Americans. As the 2020 campaign continues, diligent reporters and researchers will rediscover a treasure trove of statements by Bloomberg in praise of oligarchy.

The rich man's wonderland that Michael Bloomberg has worked so hard to create and protect is predicated on eternal job insecurity and deteriorating living standards for the masses of people -- and absolute insecurity for Blacks, whose very presence in a racist society devalues surrounding properties, requiring their constant displacement. This "austerity" regime -- better described as the global "Race to the Bottom," has been a joint project of both Republicans and Democrats for two generations. Enforced mass precarity -- buttressed by endless wars abroad and growing police repression at home -- created the class of super-oligarchs like Michael Bloomberg and Jeff Bezos, who are determined to defend their Billionaire's Oz against Bernie Sanders' political "revolution" within the Democratic Party, a property bought and paid for by the plutocrats.

Sanders is no genuine socialist. He does not propose to overthrow the Lords of Capital, but his program of health care, housing, employment and retirement "rights" (entitlements) and a sweeping Green New Deal represent the most serious threat yet to the austerity/Race to the Bottom regime, and therefore to the plutocrats plans for the nation and the world. Sanders' position on all these issues is supported by super-majorities of Democrats, creating both a potential crisis of governance as well as the already existing crisis of legitimacy for the ruling class. The oligarchy has already seen one of its governing parties, the Republicans, taken over by a maddeningly undependable and incompetent egomaniac, who rejects the "diversity" political ethic favored by the multinational corporate order. But that's only an annoyance, compared to the threat of a Bernie Sanders victory in November, a sea change that could make it impossible for pro-corporate and anti-austerity forces to occupy political space in the same party: the death of the corporate duopoly.

We at Black Agenda Report welcome such a break-up, as the only way that Black folks and progressives can be freed from the duopoly straight-jacket, to vote their aspirations and beliefs, not their fears. Bernie Sanders' leftish followers stuck with the Democrats despite their deplorable treatment by the Party, four years ago. This time, the corporate Democrats and their media machine will pull out all the stops to save the austerity/Race to the Bottom regime and their own legitimacy. The oligarchs are quite capable of physically killing the old New Dealer. But if, somehow, Sanders is allowed to win the nomination, Michael Bloomberg and other plutocrats will have created a Democratic Party machinery purpose-built to defy Sanders -- as nominee, and even as president. Bloomberg has already laid the groundwork to directly seize the party machinery, the old fashioned way: by buying it and stacking it with his own, paid operatives, with a war-against-the-left budget far bigger than the existing Democratic operation. Bloomberg's participation in Wednesday's debate, against all the rules, is proof-of-purchase.

In addition to the nearly million dollar down payment to the party in November that sealed the deal for the debate rules change, Bloomberg has already pledged to pay the full salaries of 500 political staffers for the Democratic National Committee all the way through the November election, no matter who wins the nomination. Essentially, Bloomberg will be running the election for the corporate wing of the party, even if Sanders is the nominee.

In an interview with PBS's Christiane Amanpour on Tuesday night, senior Bloomberg adviser Timothy O'Brien made it clear that the DNC is in no condition to refuse being devoured by Bloomberg, even if they wanted to. O'brien predicted the Republicans will spend at least $900 million on the election, while the DNC has only about $8 million on hand. Even the oligarch's underlings are telegraphing the takeover game plan.

Bloomberg is not so much running for president as making sure that the Democrats don't go "rogue" anti-corporate to accommodate the Sandernistas. He is ensuring that the Democratic Party will be an even more hostile environment for anti-austerity politics than in the past -- not in spite of the phenomenal success of the Sanders project, but because of it.

Such a party cannot possibly accommodate both sides, and is ultimately destined to split.

No one knows how much abuse and humiliation the Sanders faction is willing to endure to remain in the bosom of the corporate political beast. They remained faithful to their tormentors in 2016, and most are probably still inclined to give their corporate abusers yet another chance. But even if the Sandernistas punk out again, the oligarchy will relentlessly corral them in the tightest space possible in the party, with the aim of forcing them out.

Related Topic(s): Abuser; Billionaires; Corporate; Democrats; Duopoly; Oligarchy, Add Tags
Add to My Group(s)
Go To Commenting
The views expressed herein are the sole responsibility of the author and do not necessarily reflect those of this website or its editors.