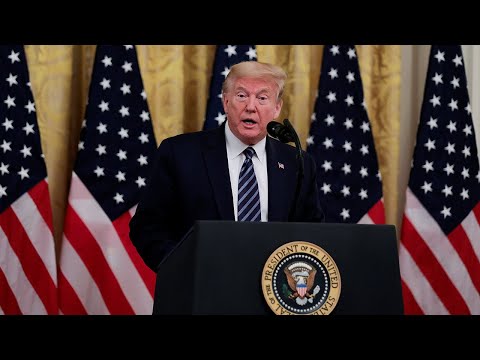 US President Trump has escalated his propaganda war against China over the COVID-19 pandemic at the White House yesterday afternoon in remarks the logic of which is a military conflict.

There is a definite meaning to this outburst. The bombing of Pearl Harbor, labelled as a "sneak attack," led to the entry of the US into World War II, and the 9/11 attack on the World Trade Center to war on Afghanistan, followed by the invasion of Iraq in 2003 based on the lie it had "weapons of mass destruction."

The continued use of the word "attack" by Trump feeds into the bogus claims by extreme right-wing and fascistic forces, both within and outside his administration, that the coronavirus was either created in or escaped from a virology laboratory in the Chinese city of Wuhan.

Trump's Secretary of State Mike Pompeo continues to push the Big Lie that the virus originated in a virology lab, despite the research by scientists that it was not man-made but evolved from animals and then mutated and spread to humans in a wet market in Wuhan.

Another variant of the claim that the pandemic is the result of an "attack" by China is the assertion in a report by the US Department of Homeland Security, details of which were leaked this week, that the Chinese government intentionally hid the dangers posed by the virus while stockpiling its own medical supplies.

The continuing escalation of the propaganda war against China has two purposes -- to deflect criticism of the Trump administration and its policy of "malign neglect" after it was informed by China of the virus and its dangers on January 3, and to condition the American public for possible military action against China, potentially leading to a full-scale war, in pursuit of its geopolitical objectives.

The war rhetoric is being intensified because the administration knows that its return-to-work policy is going to result in tens of thousands, possibly hundreds of thousands, more deaths in the US in the coming days, weeks and months.

On Sunday night, amid the drive to "open up" the economy, Trump stated that he now expected US deaths to rise from his previous estimate of around 60,000 to 100,000.

The latest threat against China comes amid a stepping up of war rhetoric this week. On Monday, the former New Jersey Governor Chris Christie, a political ally of Trump, said it was necessary for people to "sacrifice" their lives by going back to work, and this was necessary to "stand up for the American way of life."

In a reference to World War I and World War II, he said the American people had gone through "significant death before" and survived it. When asked if they would accept the loss of 3,000 lives a day, as estimated in a report by the Centers for Disease Control, Christie said, "They're gonna have to."

In another invocation of war, Trump said on Tuesday that the American people were "warriors."

The great cause for which the population is being called on to "sacrifice" is the profit interests of Wall Street and the corporate oligarchy.

Australian  Trotskyist,  Nick Beams is the Secretary of the Socialist Equality Party in Australia. His work has appeared on Global Research, the Progressive Radio Network, Tlaxcala, & the author of Marxism & (more...)
Related Topic(s): China Politics; Covid-19 Scam; Death; Sanctions; Tariffs; Trump Anger; Trump Cruelty; Trump War Against China; Trump Warmonger, Add Tags
Add to My Group(s)
Go To Commenting
The views expressed herein are the sole responsibility of the author and do not necessarily reflect those of this website or its editors.