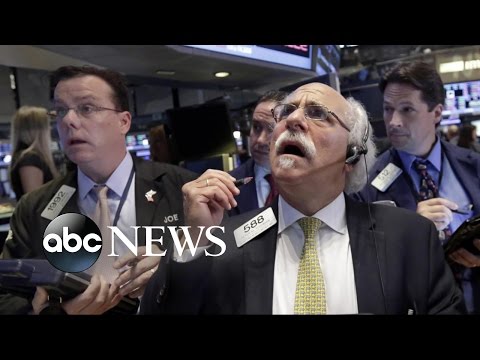 Global share markets again dropped sharply yesterday as coronavirus outbreaks spread around the world. Wall Street's S&P 500 index has had its worst week since the depths of the financial crisis in October 2008.

Selling on Wall Street was across the board, hitting China-exposed and non-exposed companies alike. The Dow Jones index finished almost 1,200 points down, its second 1,000-point fall for the week, and has now lost more than 3,200 points in the past four days.

The fall in the Dow of 4.4 percent was matched by other indexes, with the S&P 500 down 4.4 percent and Nasdaq off by 4.5 percent as high-tech stocks, including Apple, took a large hit.

Wall Street is down more than 10 percent from the record highs of last week and is now officially in what is known as "correction" territory. The S&P has experienced its sharpest ever fall from an all-time record. The technology sector, which was leading the surge on the S&P 500, is down 12 percent so far this week.

All 11 sectors of the index are in negative territory for the year. The rush out of the equities market is indicated by the fall in the yield on 10-year Treasury bonds, which yesterday slumped to a record low of 1.29 percent.

Another factor in the market fall was the warning issued by Goldman Sachs that "US companies would generate no earnings growth in 2020" and that it had upgraded its forecasts to "incorporate the likelihood that the virus becomes widespread."

An indicator of the intensity of the market storm is the rise in the Cboe Volatility Index, known as VIX, and sometimes called the "fear" index. It jumped to 33.27, its highest level since the market sell-off in December 2018. A rise in the VIX can have a cascading effect because it leads to investors selling out of riskier stocks and moving to safer havens -- a process that can accelerate a market plunge.

Significantly, the last hour of trading was marked by a wave of selling, indicating that the fall could have further to go.

In a comment to the Financial Times, Jim Paulsen, chief investment strategist of the Leuthold Group, said: "We're in panic mode. This isn't just a temporary pullback where people are wondering whether to buy the dip, this is people not wanting to touch this."

"Obviously it's a bloodbath," David Bahnsen, the chief investment officer of a wealth management firm told the Wall Street Journal.

The Wall Street plunge was preceded by further falls in Asian markets and a sharp drop in Europe.

The Stoxx 600 index of European shares fell by 3.8 percent with markets set for their worst week since the eurozone sovereign debt crisis in 2011 that was only halted when European Central Bank president Mario Draghi committed to do "whatever it takes" to meet it.

The market sell-off has been sparked by the rapid spread of the virus. More cases are being reported in South Korea, one of the world's leading manufacturing centers.

At least 10 towns in northern Italy, the center of the country's manufacturing economy, are in lockdown, with supplies to auto companies already being affected. Electronics manufacturer MTA said this week that if its 600 employees in the town of Codogno did not return to work within days, production lines at Fiat Chrysler would be halted.

Australian  Trotskyist,  Nick Beams is the Secretary of the Socialist Equality Party in Australia. His work has appeared on Global Research, the Progressive Radio Network, Tlaxcala, & the author of Marxism & (more...)
Related Topic(s): Bloodbath; China; Corona Virus Coronavirus Covid-19; Economy; Financial; Markets; Wall Street, Add Tags
Add to My Group(s)
Go To Commenting
The views expressed herein are the sole responsibility of the author and do not necessarily reflect those of this website or its editors.