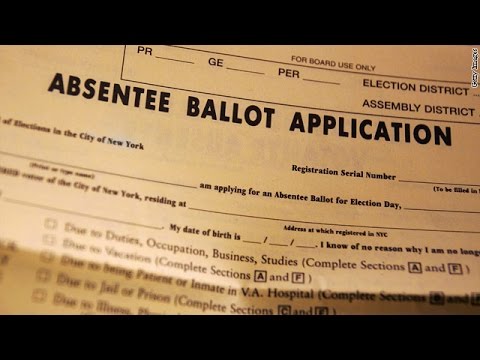 Across the country, the Democratic Party and voting rights groups have been winning legal victories to make it easier to vote in the presidential election. But no ruling addresses an issue that some experienced election officials foresee as likely to delay voting at Election Day polling places on November 3.

What may trigger voter confusion and traffic jams are rules that do not allow voters to simply drop off an absentee ballot at an Election Day poll. In some states, those voters can wait in line and, after some completing some paperwork, will get to vote with a regular or provisional ballot. Or those voters can go to a local government office to return their absentee ballot or find a drop box if that return option is offered.

"It looks like a little tiny thing, but it is a major thing," said Jan BenDor, a former election official and Michigan Election Reform Alliance statewide coordinator, speaking of voters not being able to simply return an absentee ballot at any Election Day precinct. "One reason we worked so hard to get these drop boxes is so that people don't get caught in these traps."

In Michigan, Pennsylvania, Ohio, Florida, Georgia, North Carolina and Wisconsin, there are varying scenarios awaiting voters who might think that they can quickly return an absentee ballot at an Election Day poll. Those voters face additional hurdles that they may not know about or anticipate. This snafu was previewed in some of 2020's primary elections.

"It has already happened in the previous two elections," BenDor said, referring to Michigan's March presidential and August state primaries.

"Some voters in "Milwaukee, Wisconsin," for example, reported confusion over where they could drop off their ballot in-person," an analysis of August's primaries in 16 states by the Stanford-MIT Healthy Elections Project said. "Though '[m]ost of Wisconsin's 1,850 municipalities count absentee ballots at the polling place where the voter would normally vote" 35 cities, villages and towns, including Milwaukee, count their absentee ballots at a central location.'" (Those jurisdictions want voters to return their ballots at the counting centers, not at polls.)

Election lawyers and scholars gave several explanations why this issue has not been in 2020's voluminous voting rights litigation. To win voting rights cases, one has to show the right to vote has been harmed. Because there are options for these swing-state voters, however laborious, and because the shift to widespread voting by mail in a pandemic is unprecedented and has had many impacts, fixing this potential problem on November 3 has not been prioritized.

Nonetheless, experienced election officials have been saying during recent press briefings that they expect Election Day voting to be slower due to many factors, including taking precautions in the pandemic. These officials said that they expect poll workers will tell many unsuspecting voters that they will have to go through more steps to vote -- including voters who mistakenly assume that they can just drop off an absentee ballot. Indeed, the rules on this part of the process may be the last thing on many voters' minds.

"There are stories around what we need our voters to know -- and that is that you get to vote once," said Arizona's Tammy Patrick, who now is with the Democracy Fund, speaking at a 2020 media summit convened by the National Task Force on Election Crises. "But even that narrative is a little bit difficult because the president has said, 'Request an absentee ballot, vote it, and then go and try to vote in person, and see if you can test the security'... That [gambit] will further slow down voting."

"There will be issuessome we planned for and some we haven't," said Jennifer Morrell, a former Colorado election official who is now a consultant on post-election audits, at the media summit. "What I think we are going to see, what we are seeing already, are some incredible challenges to the way we administer and conduct our elections."

Since Labor Day, there have been big victories for Democrats and voting rights groups that will make some aspects of voting easier in swing states and ensure that more ballots will be counted. (The notable exception has been Florida Republicans winning in federal appeals court to block more than a million ex-felons from paying fines and restoring their right to vote.)

"We just got the BEST news of the cycle in Pennsylvania today," said Marc Elias, the Democrat's top election protection lawyer, on September 17, referring to the Pennsylvania Supreme Court's ruling to let absentee ballots that are postmarked by Election Day be counted if the ballots arrive by Friday, November 6, as well as to allow ballot drop boxes to be used, and to require that any partisan poll watcher be from the county they are monitoring. However, Pennsylvanians with absentee ballots still must return the ballots to their county election office on November 3.

(The Republican National Committee filed an appeal on September 22 seeking to stay -- or freeze -- the Pennsylvania Supreme Court's ruling, including an indication that they would seek a U.S. Supreme Court ruling on the extension of ballot return timetables.)

Steven Rosenfeld  covers democracy issues for AlterNet. He is a longtime print and broadcast journalist and has reported for National Public Radio, Monitor Radio, Marketplace,  TomPaine.com  and many newspapers. (more...)
Related Topic(s): 2020; Absentee Ballots; Ballot_measures; Democrats; Election; State Politics; Voting, Add Tags
Add to My Group(s)
Go To Commenting
The views expressed herein are the sole responsibility of the author and do not necessarily reflect those of this website or its editors.