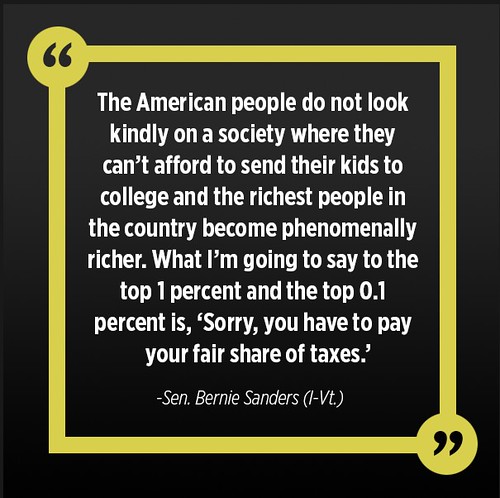 The changes won't be going as far as the president first proposed. Congress writes the laws, and House Democrats have already dialed back on Biden's wish list. Even so, the bill will almost certainly reflect a sharp shift in America's priorities.

As Biden himself puts it, "My tax policy is based on a simple proposition, which is to stop rewarding wealth and start rewarding work a little bit."

Republicans oppose everything, and a few Democrats have differences as well. Here's a quick rundown of some major items as legislators continue to shape the final bill.

The tax break on capital gains is a huge part of America's tax handout to the haves. The current levy on long-term capital gains tops out at 20 percent, little more than half the top rate on income from work. Biden hoped to equalize those rates, but that hope is history.

The Democratic-controlled Ways and Means Committee opted instead for a hike in the capital gains tax to 25 percent. Significantly, the new rate would apply to any gains realized after September 13--preventing any stock sell-offs to avoid the 25 percent rate. The Committee also recommended a 3 percent surcharge on taxable incomes above $5 million.

Ending the carried interest loophole is another of Biden's tax-fairness goals. Candidate Trump promised to do it, but President Trump reneged and let it stand: "a tax dodge for wealthy private equity and hedge fund managers," allowing them to defer taxes and ultimately treat their income as lower-taxed capital gains.

Bills are advancing in both the House and the Senate to do what Trump turned his back on. Senator Ron Wyden (D-OR) has drafted the most extensive repeal: it doesn't even include the Biden recommendation for a $400,000 income exclusion.

A supporter of the Wyden bill, former BlackRock managing director Morris Pearl, describes carried interest as an "absurd, regressive loophole with no credible economic justification...that has allowed some of the wealthiest people in the country to cut their tax bill nearly in half."

Wealthy corporations have also been big winners in the tax-cut sweepstakes: Trump reduced the rate on corporate earnings from 35 percent all the way down to 21 percent. Biden was pushing for an increase to 28 percent--still less than it was before Trump--but he won't be getting it.

The current Democratic plan calls for graduated corporate rates, moving from 18 percent for incomes below $400,000 to 26.5 percent on incomes above $5 million. The benefit of the lower rates would phase out for firms with incomes over $10 million.

Senator Joe Manchin (D-WV) wants an even lower top rate. Nothing can pass if Manchin doesn't come aboard (and every other Democrat as well). In other words, the numbers are still in flux.

Liberals are happy enough with what's in the bill, but deeply unhappy about what isn't. Listen to Inequality.org: "Without significant changes billionaires like Elon Musk and Jeff Bezos will hardly pay a nickel more in taxes. And families like the Waltons...will continue to amass huge dynastic fortunes."

All the same, America could be on the verge of a seismic change in tax policy. After decades of tax laws that disproportionately favor the rich, Biden is shifting the focus to the broad middle class.