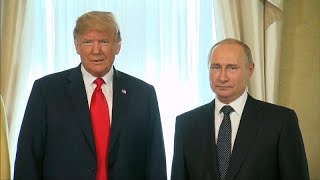 By now Russians must wonder if the better relations they desire with the US are ever to be. US Rep. Tulsi Gabbard, Democrat from Hawaii is the latest peacemaker to be declared "a Russian asset" by Hillary, the DNC, and the presstitutes.

The way the Democrats, the presstitutes, and their Puppet Master -- the military/security complex -- have it rigged, unless you want to bomb Russia into the stone age, you are a Russian asset.

How, then, can any American leader advocate bringing the dangerous tensions with Russia to an end?

Look what happened to Trump when he declared his intention of "normalizing relations with Russia." There is nothing more desperate that needs doing, but it cannot happen.

One is the military/security complex's need for an enemy in order to justify the military/security complex's $1,000 billion dollar annual budget and the power that comes with it. Fifty-eight years ago in his last address to the American people, President Dwight Eisenhower warned that "we must guard against the acquisition of unwarranted influence, whether sought or unsought, by the military-industrial complex. The potential for the disastrous rise of misplaced power exists and will persist. We must never let the weight of this combination endanger our liberties or democratic processes. We should take nothing for granted, only an alert and knowledgeable citizenry can compel the proper meshing of huge industrial and military machinery of defense with our peaceful methods and goals, so that security and liberty may prosper together."

The other immovable mountain is the US world hegemonic ideology of the neoconservatives who have controlled US foreign policy since the Clinton regime. The neoconservatives declare the US to be the "indispensable, exceptional" country with the right to impose its will and agendas on the rest of the world.

The collapse of the Soviet Union removed all constraints on Washington's unilateralism. There was no longer another global power to get in Washington's way. To keep it this way, neoconservative Under Secretary of Defense Paul Wolfowitz set out the Wolfowitz Doctrine. The doctrine states that it is the "first objective" of US foreign and military policy to prevent the rise of Russia or any country capable of serving as a check on US unilateral action. Caught off-guard by Vladimir Putin, who restored Russian sovereignty from Russia's status as an American vassal under Yeltsin, the neoconservatives and their Western media whores have launched massive propaganda attacks on Russia in order to demonize, isolate, marginalize, and perhaps overthrow with American-financed NGOs, as happened to Ukraine in the Maidan Revolution and as the US is currently attempting in Hong Kong against China.

The hegemonic ideology of the neoconservatives and the military/security complex's need for an enemy preclude any normalization of relations with Russia.

As I and Stephen Cohn have emphasized, the current tensions between the two nuclear superpowers are far more dangerous than during the Cold War. During the Cold War every American president worked with his Soviet counterpart to reduce tensions. John F. Kennedy and Khrushchev defused the Cuban missile crisis and removed the US missiles from Turkey. JFK's reward was to be assassinated by the CIA and the Joint Chiefs of Staff who concluded that JFK was soft on communism and a threat to the national security of the United States.

President Richard Nixon opened to China and negotiated the SALT I Treaty and the Anti-Ballistic Missile Treaty with Leonid Brezhnev. Nixon's reward was to be politically assassinated with the Watergate orchestration and forced to resign.

President Carter and Brezhnev signed the SALT II Treaty, and Carter was rewarded by the military/security complex throwing its money behind anti-communist Reagan.

President Reagan outmaneuvered the military/security complex, and he and Gorbachev ended the Cold War.

Related Topic(s): Bullying; Insults; Putin; Russia And Us Conflict; Russia Honors Trump; Russia-gate; Russian Influence; Self-interest; Trump, Add Tags
Add to My Group(s)
Go To Commenting
The views expressed herein are the sole responsibility of the author and do not necessarily reflect those of this website or its editors.