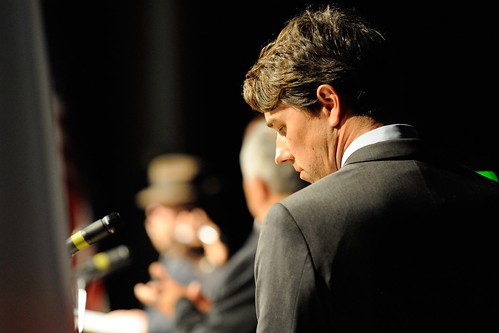 News media tell us that Beto O'Rourke has reached the top tier of potential contenders for the 2020 Democratic presidential nomination. CNN polls now rank him in third place -- behind only Joe Biden and Bernie Sanders -- among likely Iowa caucusgoersas well as among Democrats nationwide.

Progressives are apt to be enthusiastic about O'Rourke -- if they don't know much about his record.

Inclinations to hop on the Beto bandwagon are understandable. O'Rourke was inspiring this year as he fought to unseat the despicable U.S. Senator Ted Cruz with a campaign that built a broad coalition of Texans, while gaining huge small-dollar support from across the country. In late summer, many were thrilled by a video of Beto's response to a question about NFL players kneeling in protest during the national anthem; his ringing defense of dissent in the context of civil rights history was excellent.

Cruz had to sweat it out on election night and won by only 2.6 percent, a slim margin in such a conservative state. Since then, publicity about Beto O'Rourke potentially running for president has mushroomed, with corporate news outlets portraying him as a progressive.

Released a week ago, the much-publicized results of a poll that MoveOn conducted of people on its email list found O'Rourke in first place, neck-and-neck with Joe Biden and Bernie Sanders. Media spin intensified, portraying Beto as a challenge to Bernie.

NBC News broke the news of the MoveOn poll while calling it "a potentially troubling indication for Sanders." A couple of days later, the New York Times speculated that "Mr. Sanders's hold on the party's progressive base may be slipping as a new generation of Democrats like Representative Beto O'Rourke demonstrate early strength in polls and straw polls, such as the one conducted this week by the liberal group MoveOn."

Meanwhile, Democracy for America was concluding a poll of its own active supporters online. As the second week of December began, the organization's website was showing Bernie Sanders far ahead in the top spot at 38 percent, followed by Biden at 15 percent, O'Rourke at 12, Elizabeth Warren at 8, and Kamala Harris at 7. (DFA later removed the running totals from its site until release of final numbers.)

Given their at-times extreme antipathy toward Bernie during his first presidential run, mainstream news media are likely to have an appetite for a 2019 storyline that Sanders' support is eroding. O'Rourke is apt to be quite useful for such a narrative. The Democratic Party establishment that went all-out to get Hillary Clinton the 2016 nomination is palpably eager to block Bernie. And some in that establishment are already indicating that they believe O'Rourke might do the trick.

Related Topic(s): O'Rourke-Beto, Add Tags
Add to My Group(s)
Go To Commenting
The views expressed herein are the sole responsibility of the author and do not necessarily reflect those of this website or its editors.