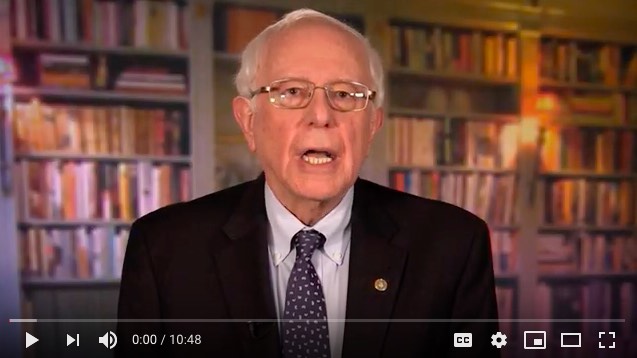 Listening to Sen. Bernie Sanders' videoed announcement of his candidacy for the Democratic Party's 2020 presidential nomination, I was struck by how much has changed since 2016, and how little.

Sanders, recall, ran a spirited primary campaign against Hillary Clinton, a campaign that was undermined by crooked dealing, dirty tricks and sabotage by the Hillary campaign and by the Democratic National Committee, all of which effectively stole the nomination from Sanders that year and that basically handed the presidency over to Trump.

Sanders could have easily defeated Trump in 2016 had he been the Democratic candidate in November. He might even have become president that year had he accepted, instead of ignored, an invitation from Green Party head and presidential candidate Jill Stein, made after Clinton stole the Democratic nomination, to run for president on the Green ticket. Many Trump voters would probably have dropped him for Sanders in that chaotic election campaign, and millions of Democrats and left-leaning independents were so disgusted with Clinton and the corrupt machinations of the DNC that they would have readily jumped ship for an independent candidate Sanders.

Let me confess here that I was captivated and inspired by Sanders during that campaign. It is undeniable that he inspired millions of people, including especially young people those under 35 who had never really been involved in electoral politics before. He did this with virtually the whole corporate media industry (including NPR) lined up against him and his policy proposals, running shoddy, fact-challenged hit pieces, often in close coordination with agents of the Clinton campaign. It was a model of grass-roots organizing against the power of big money, and it almost worked.

But Sanders ultimately caved and endorsed Clinton at the end of the Democratic Convention in Philadelphia, in a sad and embarrassing public address that deflated all the energy and passion that had built up during his campaign. Indeed his betrayal of the cause of radical reform and his signing on to the dead-in-the-water Clinton campaign may well have been what swung the election to Trump in those key normally solid Democratic states of Pennsylvania, Wisconsin and Michigan that went to Trump by very small numbers and put him over the top in the Electoral College.

Now Sanders is back in the race, with a fiery announcement speech that hit almost all the key points for a campaign aimed at making radical change; Medicare for All including the term "single-payer" lest people think he just meant just an expansion of the very limited existing Medicare program, support for immigration reform and DACA, real action on climate change, free tuition at public universities and colleges, action on student debt, etc. He mentioned combating militarism, but not specifically US militarism and more to the point, did not condemn Trump's and especially his National Security Advisor John Bolton's serious threats against both Iran and Venezuela (countries whose names were not even mentioned).

Related Topic(s): Bernie Revolution; Bernie Sanders; Bernie Sanders 2020 Presidential Candidate; Bernie Sanders Foreign Policy; Democratic National Committee; Democratic Party, Add Tags
Add to My Group(s)
Go To Commenting
The views expressed herein are the sole responsibility of the author and do not necessarily reflect those of this website or its editors.