The former head of the NAACP is running for governor on a progressive platform that's won endorsements from Bernie Sanders, Kamala Harris and The Baltimore Sun . 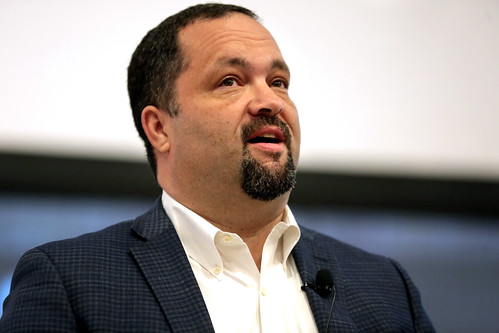 Ben Jealous is running an unapologetically progressive campaign for governor of Maryland that outlines a politics of economic and social justice that could change more than one state.

The polls suggest that Jealous is at or near the front of a crowded field going into Tuesday's Democratic primary. If he is nominated, it will be because the former head of the NAACP has run the sort of serious, issue-focused campaign that invites voters to imagine -- and build -- a future with Medicare-for-All health care, fully funded schools, and sweeping reform of a broken criminal-justice system.

This vision has secured enthusiastic support from unions representing nurses and teachers, from community activists and civil-rights campaigners, and from national figures who recognize the potential for the politics Jealous proposes. Senator Bernie Sanders, on whose behalf Jealous delivered a stirring 2016 Democratic National Convention address, has endorsed and campaigned for the Maryland contender -- as have California Senator Kamala Harris and New Jersey Senator Cory Booker.

Strikingly, Jealous also enjoys the backing of the state's largest newspaper, The Baltimore Sun, which surprised a lot of Maryland political observers in mid-June when it rolled out an endorsement of Jealous that celebrated his savvy progressivism.

"His proposals reflect a sophisticated understanding of the problems the state faces and the choices its leaders will have to make in the years ahead." --The Baltimore Sun describes @benjealous.

"Maryland voters deserve a real choice in November's election for governor, and we believe Democrat Ben Jealous provides the clearest alternative to Gov. Larry Hogan," argued the endorsement. "It's not just that the former NAACP president and CEO has the stature or political skills to run a competitive campaign against the popular and extremely well funded Republican incumbent (though he does), it's that he presents the strongest contrast to the governor in his vision for the state."

Related Topic(s): Ben Jealous NAACP President; Democratic; Issues; Maryland; Medicare; Politics, Add Tags
Add to My Group(s)
Go To Commenting
The views expressed herein are the sole responsibility of the author and do not necessarily reflect those of this website or its editors.