Dems Cannot Allow Republicans to Cancel Black Votes, as a Matter of Conscience and Survival 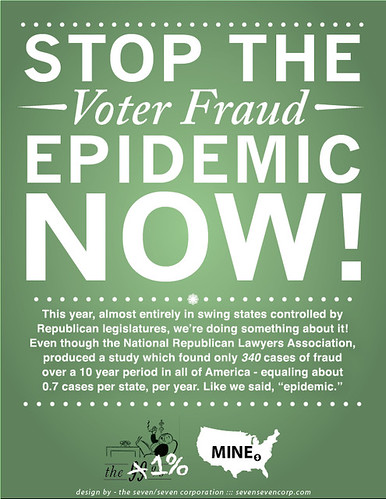 Voter Fraud Is An Epidemic.
(Image by Max Gaines from flickr)   Details   DMCA

Arizona State Representative John Kavanagh, a leader in advancing voter suppression bills in the state admits the Republican credo: "everybody shouldn't be voting."

"Not everybody wants to vote, and if somebody is uninterested in voting, that probably means that they're totally uninformed on the issues," Kavanagh said. "Quantity is important, but we have to look at the quality of votes, as well."

In Arizona, Kavanagh is likely referring to Brown and Black citizens who are guaranteed the right to vote under the 15th and 24th Amendments.

As I noted in a March 15 BuzzFlash Editor's Commentary, the federal government did not intervene as Southern states denied most Blacks the right to vote between 1877 and August, 1965 when Lyndon Johnson signed the Voting Rights Act. However, in 2013, the Supreme Court struck down a key section of the Voting Rights Act that required states with histories of racial voting discrimination to receive Department of Justice approval before changing their voting laws. A new round of voter suppression, particularly aimed at Black voters was unleashed once again, along with the pre-existing voter-limiting laws such as released felon voting restrictions, purging and caging in some states.

Exacerbating the return to treating Black voters as ghosts, Trump successfully utilized "The Big Lie" to create mass delusion that he lost because of insufficient voter suppression laws and allegations of machine irregularities and straight out cheating. No court in the land, including the Supreme Court agreed with his attorneys, but even with his departure from the White House, "The Big Lie" lives on as an excuse to further exclude Blacks and others from voting by creating as many obstacles as possible to casting a ballot all of this nefarious action based on mass delusion.

The Democrats own an abiding debt to Blacks, who have been steadfast supporters of the party in its modern incarnation, to guarantee their voting rights, instead of standing by as the Republicans steamroll voter exclusion that had its origin in the original sin of slavery.

The future of democracy depends on the passage of HR 1, The For the People Act, and HR 4, John Lewis Voting Rights Advancement Act, in the Senate. (HR 1 passed in the House last week.) If the Dems don't protect the Black vote, if they don't pass these two bills, the Republicans will be in power for decades. Their return to majority status in the Senate and possibly in the House, given the explosion of voter suppression laws, will allow the GOP to mercilessly ensure minority white Christian rule for perhaps decades.

If Dems want to transform US government in the style of FDR, they will have to eliminate the tsunami of stolen elections (due to keeping voters from the polls through Jim Crow restrictions). That will mean they will have to eliminate or modify the filibuster in some form to pass these two bills, vital to a robust and empathetic democracy, by a vote of 51 in the Senate. (The John Lewis Voting Rights Advancement Act to repair the harm done by the 2013 Shelby County v. Holder decision will be passed by the House in the near future.)

Mitch McConnell's tantrum this week that if the Democrats ended the filibuster, he would pursue a scorched-earth policy and turn the Senate into a 100-car-pileup is a good sign. The Biden Administration absolutely blindsided the GOP on the $1.9 trillion COVID relief bill. The Republicans being unused to Democrats exercising a muscular, confident and uncompromising strategy appeared shellshocked that The American Rescue Plan moved so quickly to passage without a single Republican vote and with 70% support from the US public. That the Democrats didn't hesitate as they forged ahead with a passage of the bill through Reconciliation left Republican leaders feeling whiplash.

Assistant Majority Leader Senator Dick Durbin (D-IL) was the trigger for McConnell's "rue the day" outburst, when Durbin said on a Sunday talk show he was now for eliminating the filibuster. His reaction to McConnell's threats was quite simple: McConnell, Durbin responded, has already pursued a "scorched-earth" policy whenever he has been the majority leader.

It is true that the filibuster poses a challenge for two reasons: 1) Not all Democratic Senators want to remove it (and Biden wants a reversion to a talking filibuster instead of a 60-vote cloture); and 2) the one point that McConnell is correct on is that a filibuster removal could come back to haunt the Dems if they lose control of the Senate, which is certainly possible given the extent of the voter suppression the Republicans are enacting into law in red states.

There are actually four filibuster options:

Yes, there is a Joe Manchin problem and a Kyrsten Sinema problem in that they officially oppose complete elimination of the filibuster. However, Manchin, like Biden, is open to requiring a "talking filibuster," and might, as is also the case with Sinema, be persuaded to keeping the filibuster, but removing it for the consideration of some specific bills, such as HR 1 and HR 4.

Mark Karlin is founder, editor and publisher of BuzzFlash.com, a website providing headlines, news and commentary to over five million people a month. He is a gun control activist with a focus on Illinois.
Related Topic(s): Democrats; Filibuster; Gerrymandering; Racism; Republican; Senate, Add Tags
Add to My Group(s)
Go To Commenting
The views expressed herein are the sole responsibility of the author and do not necessarily reflect those of this website or its editors.

"In Guns We Trust": New Supreme Court Motto for U.S.

Pat Buchanan and the Long Goodbye

From the 1953 CIA Overthrow of Iran Democracy, to the Iraq War, to the Criminal Gulf Disaster and Deaths, BP Was There

How the Reagan Revolution Succeeded: Strangling Government in a Bathtub and Destroying Public Services

Who Says a Terrorist Attack Has to be In an Airplane? How the GOP Threatens Our Lives