Trillions of dollars of investments are being taken out of carbon-intensive companies. Governments must now take notice 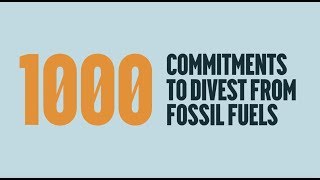 Celebrate 1000 divestment commitments and counting!
(Image by YouTube, Channel: 350.org)   Details   DMCA
Six years later, we have marked the 1,000th divestment in what has become by far the largest anti-corporate campaign of its kind. The latest to sell their shares -- major French and Australian pension funds, and Brandeis University in Massachusetts -- bring the total size of portfolios and endowments in the campaign to just under $8 trillion ( 6.4tn).

As Christiana Figueres, the former UN climate chief who managed to push through the Paris accords in 2015, put it: "The pensions, life insurances and nest eggs of billions of ordinary people depend on the long-term security and stability of institutional investment funds. Climate change increasingly poses one of the biggest long-term threats to those investments and the wealth of the global economy." Last year she turned down an honorary degree from a US university because it hadn't yet sold its stock.

Bill McKibben is the author of a dozen books, including The End of Nature and Deep Economy: The Wealth of Communities and the Durable Future. A former staff writer for The New Yorker, he writes regularly for Harper's, The Atlantic Monthly, and The (more...)
Related Topic(s): Climate; Divestment; Fossil Fuel, Add Tags
Add to My Group(s)
Go To Commenting
The views expressed herein are the sole responsibility of the author and do not necessarily reflect those of this website or its editors.