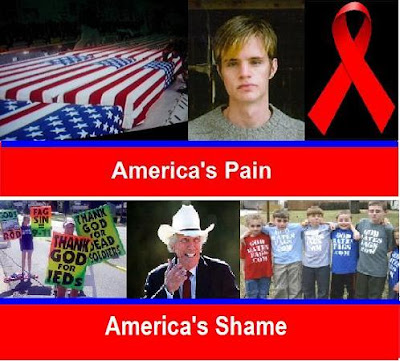 THE LIFE OF RELIGIOUS HATE and THE DEATH OF DECENCY

"Speech is powerful. It can stir people to action, move them to tears of both joy and sorrow, and - as it did here - inflict great pain. On the facts before us, we cannot react to that pain by punishing the speaker," Roberts said. "As a nation we have chosen a different course - to protect even hurtful speech on public issues to ensure that we do not stifle public debate." - Chief Justice John Roberts, Snyder vs Phelps

"Public Debate" - has Fred Phelps and his clan ever had a "public debate" with America? Mindless hate can only debate with its opposite - meaningful love. And while Fred Phelps has always garnered the public's attention, America's "Church" has never really stepped up to the podium for that debate. We will hear an almost deafening chorus of "Although we abhor what Phelps does, we applaud the Court's decision."

Another chorus we will hear: "Phelps isn't really Christian. He certainly doesn't speak for us who are." We've heard that one before. Too little, too late: Phelps' rants have gotten notoriety for over 15 years, but few have ever actually chastised him in public. How many "faith-based" pickets have ever graced the outside of Westboro Baptist Church? How many have taken out ads in local or national papers denouncing Phelps' deeds? Not enough. When have the Baptist conclaves attempted to legally remove the name "Baptist" from Westboro Church? None that I know of. America's denominations and non-denominational churches have always done more harm to America by NOT saying anything, by NOT doing anything. I saw the results of their indolence in the faces of AIDS victims streaming into San Francisco. It was definitely passive/aggressive behavior on the part of the Christian Right.

Interestingly, as of this writing, neither the FRC nor the AFA have commented on the decision. As of 8:30PM (EST), when I Googled Phelps ruling response, the only ones to come up were:

The response from the ACLU:

"The Court's decision properly and respectfully acknowledges the Snyder family's grief. But it correctly holds that the response to that grief cannot include the abandonment of core First Amendment principles designed to protect even the most unpopular speech on matters of public concern."

The response from the Phelps clan was predictably giddy and dire at the same time:

A leader of the Westboro Baptist Church told reporters Wednesday that the congregation would "quadruple" the number of funeral protests in the wake of a ruling by the Supreme Court.

"Let me tell you what this church does: Shut up all that talk about infliction of emotional distress..,When you're standing there with your young child's body bits and pieces in a coffin, you've been dealt some emotional distress by the Lord your God"

As is sometimes the case with her, Sarah Palin got defiantly confused and combined two parts of the First Amendment in her tweet about the decision: