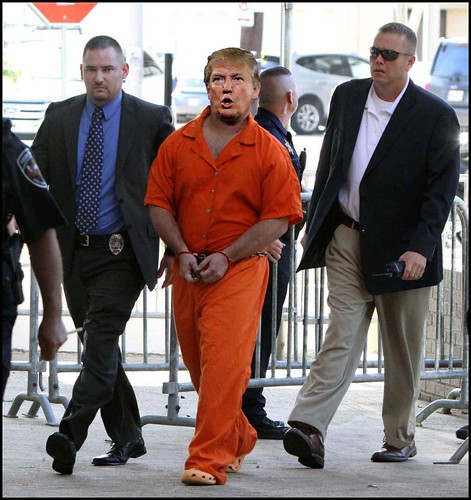 purp8 Lock Him Up
(Image by FolsomNatural)   Details   DMCA

All across America this past year-and-a-half people have been dying an agonizing, terrifying, drowning-in-their-own-fluids death, their relatives helpless, saying goodbye using zoom or FaceTime. Families broken and shattered; husbands, wives, children and grandchildren left bereft; doctors, nurses, and physicians assistants dying along with them or holding their hands as they draw their final, tortured breath.

Many of those deaths were absolutely unnecessary. They happened because of decisions made by a small group of people led by Donald Trump.

If you or I made a decision, grounded in the desire to gain a political or other type of benefit, that caused even one single person to die we'd be on our way to prison.

Trump not only caused over 130,000 Americans to die (according to Dr. Deborah Birx's sworn testimony before Congress last week), but there's a pile of evidence - which I'll lay out below - that he did it because he believed the virus was hitting Blue states and Black people the hardest.

If this is true (and I'm building a case here that it is), it's called second-degree murder, which, to use the definitions of the State of Florida where Trump lives (there is no federal homicide law) constitutes:

"The unlawful killing of a human being, when perpetrated by any act imminently dangerous to another and evincing a depraved mind regardless of human life, although without any premeditated design to effect the death of any particular individual, is murder in the second degree and constitutes a felony of the first degree, punishable by imprisonment for a term of years not exceeding life""

From the first case in the US on January 20, 2020 until the week of April 7th of last year, Trump and his team were actually trying to do something about the Covid pandemic.

Trump put medical doctors on TV daily, the media was freaking out about refrigerated trucks carrying bodies away from New York hospitals, and doctors and nurses were our new national heroes.

By March 7th, US deaths had risen from 4 to only 22, but that was enough to spur federal action. Trump's official emergency declaration came on March 11th, and most of the country shut down or at least went partway toward that outcome that week.

The Dow collapsed and millions of Americans were laid off, but saving lives was, after all, the number one consideration. Jared Kushner put together an all-volunteer taskforce of mostly preppie 30-something white men to coordinate getting PPE to hospitals.

They even had a plan for the Post Office to distribute 650 million masks - 5 to every American household - to stop the pandemic.

But then came April 7th, when the New York Times ran a front-page story with the headline: Black Americans Face Alarming Rates of Coronavirus Infection in Some States.

Other media ran similar headlines across the American media landscape that day, and it was heavily reported on cable news and the network news that night. Most of the people dying from Covid, the report found, were Black or Hispanic, not white people.

White conservatives responded with a collective, "What the hell?!?"

Related Topic(s): Corona Virus Coronavirus Covid-19; Covid-19; Trump; Trump Crime, Add Tags
Add to My Group(s)
Go To Commenting
The views expressed herein are the sole responsibility of the author and do not necessarily reflect those of this website or its editors.

6 people are discussing this page, with 16 comments