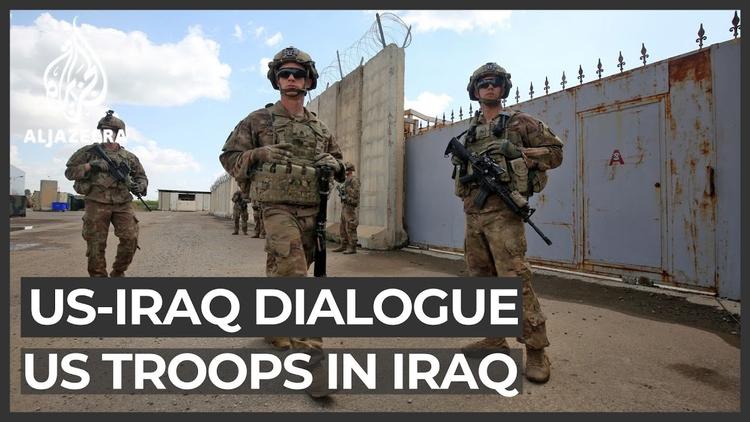 On Thursday, the new Iraqi government of Mustafa al-Kadhimi concluded its first security review with its US partner, according to Arwa Ibrahim at Al Jazeera. They issued a joint statement saying,

"...In light of significant progress towards eliminating the ISIS [or ISIL] threat, over the coming months the US would continue reducing forces from Iraq and discuss with the Government of Iraq the status of remaining forces as both countries turn their focus towards developing a bilateral security relationship based on strong mutual interests. The United States reiterated that it does not seek nor request permanent bases or a permanent military presence in Iraq."

Walid al-Khouri at the Beirut-based Arabi21 reports that after the statement was issued, al-Khadhimi gave a speech in Arabic to Iraqis in which he said "that American troops would withdraw from the country and all US bases would be closed in accordance with a specified timetable."

Al-Khouri notes that the joint communique was not nearly so categorical, speaking only of further reduction of US forces and discussions on the status of the remaining forces. Nor was there any mention of a timetable.

The US Iraq talks were conducted online because of the coronavirus by Abdul Karim Hashem Mustafa, the Senior Under Secretary of Iraq's Ministry of Foreign Affairs, and David Hale, the US Under Secretary of State for Political Affairs.

Al-Kadhimi is a Shiite prime minister with a Shiite majority in parliament, among whom there are still hard feelings about the January 3 Trump assassination of Iraqi general Abu Mahdi al-Muhandis, along with Iranian general Qasem Soleimani, at Iraq International Airport. The American strike had not been cleared with the Iraqi government, and the then prime minister denied Trump's charge that Americans were in danger, nor was it backed up by Pentagon documents.

In 2018 the Iraqi parliament recognized the largely Shiite militias or "Popular Mobilization Forces" (PMF) as a sort of national guard and regularized them. As the leader of the Iraqi Brigades of the Party of God (Kata'ib Hizbullah), al-Muhandis was an Iraqi military commander and was killed by a putative ally of Iraq, the US.

Outraged, the Iraqi parliament voted that the US military must leave Iraq. Although the Trump administration attempted to spin this vote as "non-binding," it was not any such thing. The vote instructed the prime minister to make the arrangements for an orderly US withdrawal.

Trump says he would like to get out of Iraq, but he was angered by the ultimatum and threatened to impose sanctions on Iraq and to make it pay for improvements the US made to al-Ain and other Iraqi bases, if US personnel were summarily expelled.

In the aftermath, Kata'ib Hizbullah and its allies attacked US troops on Iraqi bases, killing two and wounding several others. A tit for tat series of strikes was growing when the coronovirus hit and Iraq went into lock-down.

Then al-Kadhimi was elected prime minister, and he is desperate to end the conflict between the PMF and the US. The joint statement, with al-Kadhimi's addendum in the form of a stand-alone speech, was intended to be ambiguous enough to please all sides. The Shiite militias were given the impression that US troops would be leaving in fairly short order, while al-Kadhimi let Pompeo and Trump maintain the illusion that this was Washington's plan all along.

Al-Khouri reports that US troops are now only at two bases. Some appear to have been pulled out because of the dangers of Covid-19, and it is not clear how many US troops are now in Iraq (the number had been about 5,200 at the beginning of the year).

He reports that Abbas al-Zamili, a member of parliament from the pro-Iran Badr Corps party-militia that forms part of the Fath (Victory) bloc, expressed relief at the statement. He said, "The negotiations are headed in the right direction," and that there was now mutual understanding that the US military would leave on a timetable.

Al-Zamili said that the Badr Corps, led by Hadi al-Ameri, is satisfied with al-Kadhimi's leadership so far, and that the new prime minister had recognized that the parliament voted for the departure of all foreign military forces from the country and the recovery of Iraqi sovereignty, and had committed himself to those goals in talks with MPs. He said that French and Belgian troops had already left and that so had many American troops, and those that were left were confined to the Ain al-Asad and Taji bases.

As an aside, I would point out that the French departure was announced as an interruption of their training mission on account of the pandemic, and it is not clear to me that it was meant to be permanent.

Related Topic(s): Iraq; Iraq Exit Strategy; Isil; Taliban; Trump; Trump And Iraq, Add Tags
Add to My Group(s)
Go To Commenting
The views expressed herein are the sole responsibility of the author and do not necessarily reflect those of this website or its editors.