Despite the best efforts of the Los Angeles City Attorney's office, neighborhood councils within Council District 12 continue to discuss John Lee's role in the events that led to the felony conviction of his predecessor and former boss, Mitchell Englander. The latest to do so was the Northridge West Neighborhood Council (NWNC), which took up the issue at the July 31, 2020, meeting of its Executive Committee with a resolution asking for clarification about Lee's involvement in a trip to Vegas that included illegal gifts to city officials, bribery and illegal prostitution. The current councilman has admitted to being on the trip but has not confirmed if he is the "City Staffer B" who post-dated a reimbursement check and otherwise attempted to obstruct justice.

Learning from directives of city attorneys that have created obstacles for other neighborhood councils, NWNC President Rana Sharif took the time to note that the resolution being considered was "not about claims about culpability or an investigation". Instead, "it is a motion for clarity on an issue that has an impact in our neighborhood council and, more generally, in CD12".
Opposing the motion was Kathleen Edwards, who holds one of the two Community Interest Stakeholder seats. In this position, she is supposed to represent stakeholders who affirm "substantial and ongoing participation within the neighborhood council's boundaries and who may be in a community organization such as, but not limited to, educational, non-profit and/or religious organizations". However, instead of welcoming public input from all, she asked the board officers to limit "outside influences" who were members of "other neighborhood councils". This ignored the fact that by design, people are meant to be constituents of multiple neighborhood councils as they "work, live, play, and learn" throughout the city. Enforcing this request would have also violated the Brown Act as the meeting was public and open to all who wish to participate. There is no requirement that they "clarify" any personal information and can remain anonymous if they choose. 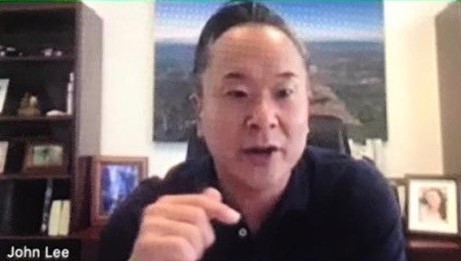 (Image by Public Domain)   Details   DMCA
After hearing public comments that were unanimously in favor of the resolution and detailed the many accusations against "City Staffer B", Board Vice President Abby Bailes questioned why Lee was not invited to participate in the meeting. Bailes then attempted to muddy the waters with a series of untruths and deflections:

The day before this meeting the United States Attorney's office announced that Lee's fellow councilman, Jose Huizar, was "charged in 34-count indictment alleging wide-ranging political corruption". These charges related to the same "ongoing corruption investigation being conducted by the FBI and the U.S. Attorney's Office" that ensnared Englander. The attorneys encouraged "any member of the public who has information related to this or any other public corruption matter in the City of Los Angeles... to send information to the FBI's email tip line at pctips-losangeles@fbi.gov or to contact the FBI's Los Angeles Field Office at (310) 477-6565".

Public officials are not merely expected to follow the letter of the law; they must conduct themselves ethically. Lee has admitted to participating in a trip where illegal behavior took place. He clearly did not disclose the personal benefits that he received on this trip. Lee also accepted the endorsement of Englander even after he knew that his former boss was under investigation. This information was kept from the public with the knowledge that the voters would be less likely to vote for him if they had all of the facts.

If Lee is in fact "City Staffer B", then he did engage in potentially criminal activity including obstruction of justice. This includes postdating a check to make it appear that he had reimbursed "Businessman A" for the trip's expenses and coordinating testimony with Englander. "City Staffer B" also accepted chips so that he could gamble, a form of bribery.

First, Lee is no longer a Republican. He fled the party before the last election.

Second, from court documents, it appears that Englander was unintentionally snared in an ongoing investigation when he and Lee flew to Las Vegas as the guest of "Businessman A". As previously noted, one other Los Angeles City Councilman has already been indicted and he is a Democrat. This investigation is not a witch hunt for Republicans but a fishing trip in a fully stocked sea of corruption.

Edwards then claimed that Lee has already admitted to being "City Staffer B". She then offered to send information from "his Twitter page" and "several newspaper reports" so that people would "stop passing untruths". A request was made using the email address that she has listed on the NWNC web site asking for this information, but no response was received. This is probably because his Tweet only says that he was on the trip to Vegas and newspapers confirm that "Lee did not answer questions about whether he is the person identified as City Staffer B" and "Lee has never confirmed whether or not he is the staffer, known as 'City Staffer B,' mentioned in federal documents".

At the conclusion of the discussion, the Executive Committee voted unanimously to include the resolution calling for a "public statement clarifying Councilmember John Lee's participation and involvement" to be placed on the agenda of the August 11 meeting. At the request of an Executive Committee member who is a Lee supporter, the councilman will be invited to participate. The meeting will be conducted on Zoom and the public can participate and make their voices heard. Complete details will be available on the NWNC website three days before the meeting. You can also sign up to receive the agenda by email on the city website.

________________________________
Carl Petersen is a parent, an advocate for students with special education needs, an elected member of the Northridge East Neighborhood Council, a member of theLAUSD's CAC, and was a Green Party candidate in LAUSD's District 2 School Board race. During the campaign, he was endorsed by the Network for Public Education (NPE) Action and Dr. Diane Ravitch called him a "strong supporter of public schools." Links to his blogs can be found at www.ChangeTheLAUSD.com. Opinions are his own.