My recent publication on Economic Justice and Human Ecology is a short catalogue of ecological and human benefits that will flow from an infusion of economic justice into our Econ-Ecol system. This list spurs me to issue an invitation to Economists, Ecologists, and Physicists to help our country to become a more perfect Union.

Thanks to Blair Gelbond, a contributor at OpEd News, I have been made aware of a neologism created by Peter Russell in his Global Brain Awakens (1995). Peter Russell speaks of "ego-nomics." So, I am happy to include all "Ego-nomists" in my invitation. They are the literati of old and a few others: Novelists, Reporters, Political Scientists, Philosophers, Sociologists, Psychologists, MDs, all Artists, Theologians, Mathematicians, Scientists today one must specify Neurologists.

Clearly, economists, ecologists, and physicists, plus novelists, reporters, political scientists, philosophers, sociologists, psychologists, MDs, all artists, theologians, mathematicians, scientists, and neurologists, individually, have a wealth of proposals on how to improve living conditions in the world so that everyone will enjoy a much richer life than the one experienced at present.

Separate, as Benjamin Franklyn wisely warned us, we might doom ourselves. Together, we will all prosper. (Do not be scared; the issues are not so complex as to be beyond our understanding).

Will my older publication titled "Economics for Physicists and Ecologists" help? This article was originally published in Transactions on Advanced Research, Vol.4 (1) 6-9, January 2008. Here it is:

Abstract: The lack of communication among physicists, ecologists, and economists can be mostly attributed to the type of mathematics economists use as well as their study of flows of money rather than stocks of real wealth. This paper presents the essential characteristics of a new framework of economic analysis, Concordian economics, which uses standard mathematics and geometry and observes stocks as well as flows of real and monetary wealth. This paper thus attempts to build bridges among the relative disciplines, because it is becoming increasingly clear that vexing problems of human and natural ecology can be solved only through collaboration among economists, physicists, and ecologists.

There is a well-known lack of communication among physicists, ecologists, and economists. Using a new framework of economic analysis, Concordian economics [1], a system of thought that results from the relentless application of age-old tools of logic and epistemology to mainstream economic theory, this paper attempts to build bridges among the various disciplines so that lines of communication can be opened and solutions can be found to today's vexing problems of economics and ecology. Physicists, being practical problem solvers, and ecologists, being deeply concerned about the status quo, might join together in this mission to let economics reach the splendor of its full potential.

Lack of communication among physicists, ecologists, and economists is rooted in the practice of economists, who have developed their own specialized form of mathematics to analyze economic problems; and have reduced the number of admissible problems to those that exist in the market at the moment of the exchange. Thus they analyze only flows, not stocks of wealth; and they observe only money, not real resources. In particular, physicists have long remarked that modern economic theory cannot possibly be a fit description of the reality because, among other reasons, it is a closed system without inlets and outlets [2]. Ecologists, on their part, never seem to engage economists because, among other reasons, while they are mainly concerned with stocks of real wealth, economists are mainly concerned with flows of money [3].

Three essential findings of Concordian economics are reported here with the assistance of modern mathematics and geometry: stocks are separated from flows of wealth; the real economy is separated from the monetary economy; these two parts of the economic process are then joined together through the introduction of the legal and institutional economy into the equations. Through painstaking analysis (Gorga 2002, 23-158) [4], real wealth (RW) is defined as stocks of consumer goods (CG), plus capital goods (KG) and goods hoarded (GH). The fundamental model of production (P) is formulated as follows (Ibid., 38, 313):

where IA = Investment Assets (until sold). Monetary wealth (MW) is defined as the sum of all financial instruments used to purchase CG, KG, and GH as well as other financial instruments: corresponding equations form the model of consumption (Ibid., 318). The legal economy is defined as the value of all rights of ownership over real and monetary wealth: corresponding equations form the model of distribution (Ibid., 316). Since the structure of these models is selfsimilar, they are omitted here.

The three systems of equations form an equivalence [5], the equivalence of production to distribution and to consumption. They describe the same entity, the economic process, from three strictly interconnected points of view. In more detail, this equivalence refers to the production of all real wealth; the distribution of ownership rights over both monetary and real wealth; and consumption (or expenditure) of monetary instruments to purchase real wealth. This equivalence can be more easily observed with the assistance of geometry. Thus, using established protocols, it is possible to synthesize the above three systems of equations into one unit represented by the following diagram:

Figure 1 represents the economic process at the moment of the exchangeas in mainstream economics, but with an enlarged focus. The unit of account can be the economy of an individual person, an individual firm, the local, the national, or the world economy. Figure 1 reads as follows: When goods and services pass from producers to consumers, monetary instruments of a corresponding value pass from consumers to producers. For the exchange to occur, the transactors must be the owners of both money and real wealth. Then, one cycle of the economic process is completed. As can be seen, Concordian economics is wholly relational and inherently dynamic. This second characteristic becomes more explicit if one sees each rectangle of Figure 1 as a Poincare' section. In Figure 1 the economic process is observed at one static moment in time.

There are three approaches for a comprehensive study of the dynamics of the economic process. One is the analytical/mathematical approach. It yields the following generalized system of equations:

The second approach for the study of the dynamics of the economic process is the historical/latitudinal one. This study calls for following the dynamic transformation of the system, ideally from the beginning of time till today. Starting from flows of real and monetary wealth one obtains a result that is very familiar to modern physicists, a strange attractor or a Lorenz attractor, see, e.g., Thompson (1986, 228) [6]. A few cycles are reproduced here: 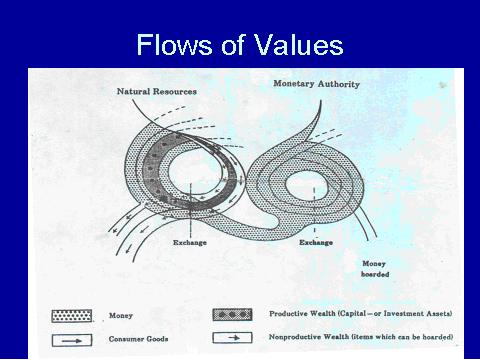 With Figure 2, we are not only within the economic process an area that is a black box to mainstream economics [7]; we have also found the inlets and outlets requested by physicists. The inlets are flows of real and monetary wealth; the outlets are consumer goods, goods hoarded, and money hoarded. It is only capital goods and money to purchase real wealth that remain permanently within the system. The flows of the legal/institutional economy are fully inserted in this construction: They are invisibly present at the moment of the exchange. In order to buy and sell wealth one has forever had to have ownership of that wealth. Indeed, to think of the extreme complexity of the reactions that occur within the economic system, the reader is encouraged to mentally close the two halves of Figure 2 thus creating the image of a torus or a cyclotron. In the reality of daily life, stocks and flows of real and monetary values do not organize themselves into neat patterns, but tend to intermingle and interact with each other.

The third approach is the longitudinal/programmatic one, through which one obtains an external view of the economic system as a whole. This is a new perspective that yields a simplified understanding of other characteristics of the economic system. This mode of analysis can be briefly described as follows: If the economic system were composed of three identical, synchronous, and compenetrating spheres (obtained by rotating each rectangle of Figure 1 at ever increasing speed and in all directions about their geometric center), the system would leave behind only one trajectory as an indication of its dynamics. This line whatever its pattern would indicate that the three spheres were in continuous equilibrium with each other. This is not the case in economics: As Mandelbrot (1983, 1) [8] is fond of saying, "Clouds are not spheres, mountains are not cones, coastlines are not circles, and bark is not smooth, nor does lightning travel in straight lines." Can economic systems be expected to be represented by perfect solids?

To say the least, the trajectory of aggregate values of monetary wealth (MW) can be expected to soon leave the initial condition of equilibrium (0,0,0) and, spurred by the facility with which monetary instruments can be produced, grow at a faster rate than the trajectory of values of real wealth (RW). Also, the spheres representing the pattern of distribution of values of ownership rights over real and monetary wealth, which are known to remain rather static over time, can be conflated into two overlapping straight lines to be identified as DO. Then, over time, eliminating all short and long term, cyclical, random, or aperiodic loops, breaks, and turns, the system as a whole can be expected to leave behind idealized traces of motion as in the following figure:

The distance between RW and MW will eventually yield the mathematical measurement of the "bubble". Current efforts to identify the bubble are especially intense [9]; physicists adept at chaos theory have been investigating this issue for quite some time [10]. Area "a" with its alternative subareas a' and a''attempts to describe the condition of disequilibrium (the bubble) that so often develops between monetary and real wealth and suggests that the smaller this area, the smaller the loss of real income over time. How to close the gap between the real and the monetary economy in the shortest possible time is clearly a problem of control, namely, a problem of economic policythe problem of creating a just and sustainable economy.

There is much work to be done. As can be seen, the intellectual framework is mostly done; it is the practical work that is all to be done. This is the work of organizing the data in accordance with the categories of thought specified above; this is the work of analyzing the data with the assistance of modern tools of scientific research. The tempi for the performance of this work can be enormously speeded up if physicists, ecologists, and economists assiduously work together [11].

[9] Because of its guidance from Ben Bernanke, most notable these days is the work done at the Bendheim Center for Finance at Princeton (Princeton Weekly Bulletin, May 26, 1997 and ff.).

[10] See much work done at the Santa Fe Institute.

*Carmine Gorga, PhD, see Wikipedia and Google Scholar, a Fulbright Scholar, is president of The Somist Institute. He has recently (?) been classified as a Gravatar, a Globally Recognized Avatar.

Why does this article have no ads and a nice presentation? The author has chosen to have it shown like this. More info can be found by clicking here.

Related Topic(s): Ecology; Economic; Economics; Economists; Economy; Invitation; Nature; Perspective; Physicists; Spiritual; (more...) Theologians; Work, Add Tags  (less...)
Add to My Group(s)
Go To Commenting
The views expressed herein are the sole responsibility of the author and do not necessarily reflect those of this website or its editors.