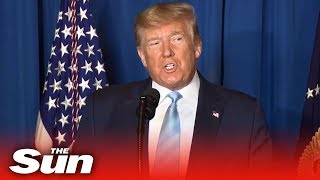 Donald Trump says .we terminated Iran general to stop a war not start one..
(Image by YouTube, Channel: The Sun)   Details   DMCA

I suspect all U.S. Generals in the Middle East are thinking "Thanks Trump, for putting a target on my back!" after Iranian Major General Qassam Soliemani, the head of the Quds Revolutionary Forces, was assassinated outside of Baghdad's international airport by U.S. drone on the direct orders of President Trump.

As easy as it was for an American drone to blow up two vehicles in Soliemani's convoy coming from the airport, it will not be difficult for Iranian forces to retaliate by targeting senior U.S. military and diplomatic officials. Senate Majority leader Mitchell McConnell's comment that "our prayers are with U.S. diplomats and military in the region" is small consolation to those who will no doubt feel the brunt of Iranian ire over the assassination of one of the most popular leaders in Iran.

Should Wikileaks ever have another Chelsea Manning or Ed Snowden that will provide the world with documents that reveal the Trump administration's deliberations on the decision to cataclysmically escalate the confrontation with Iran, a country of 80 million that has been under U.S. sanctions since the 1979 revolutionary overthrow of the U.S.-backed Shah of Iran, we will finally find out who in the administration supported the decision and who was against it.

My guess is that the U.S. military was against the assassination knowing that U.S. military forces will get the brunt of Iranian retaliation. Chairman of the Joint Chiefs of Staff Mark Milley said, "Damn right, this puts our troops at risk." I think he realizes that he himself would be one of the first retaliatory targets.

I would guess that the CIA was for the assassination, the CIA whose officials can generally hide from public view. And it probably was a CIA drone, not a U.S. military drone that fired the missiles that assassinated Soleimani. In 2017, Trump gave the CIA the authority to again use assassin drones after it had been withdrawn by the Obama administration.

No matter who was for and against the assassination, when you look for targets for retaliation, there are many: oil fields in Saudi Arabia, oil tankers in the Persian Gulf, big US military installations in Qatar (Central Command forward), Bahrain (5th fleet) and Djibouti (naval and drone bases)

Here are 36 bases with US Military forces in 14 countries that are neighbors with Iran. Additionally, there is a U.S. Embassy in each of those 14 countries as well as in Lebanon that could be targets for retribution for the assassination of General Soleimani.

Largest US military base in Afghanistan with US Army, Marines, Navy and Air Force troops located there. Medical and logistics facilities are located here as well as various types of aircraft and helicopters.

Shindand Air Base in Heart Province

A shared base with US and NATO forces.

Joint base with NATO forces.

Ann Wright is a 29-year US Army/Army Reserves veteran, a retired United States Army colonel and retired U.S. State Department official, known for her outspoken opposition to the Iraq War. She received the State Department Award for Heroism in 1997, after helping to evacuate several thousand (more...)
Related Topic(s): American Military; Drone; Generals; Iran; Trump Cornered; Trump Warmonger, Add Tags
Add to My Group(s)
Go To Commenting
The views expressed herein are the sole responsibility of the author and do not necessarily reflect those of this website or its editors.